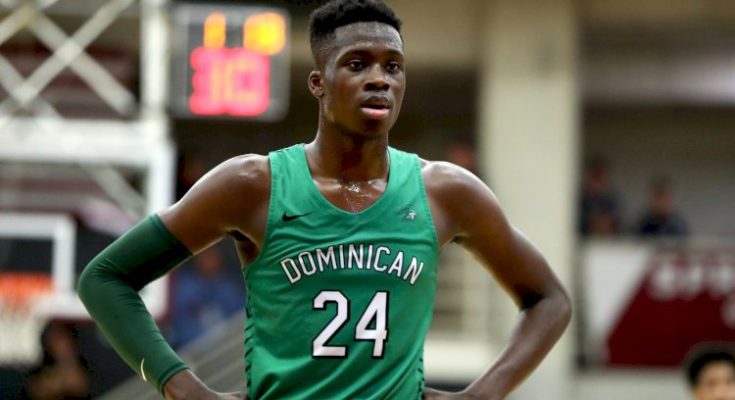 He competed for Dominican High School in Whitefish Bay, Wisconsin. He is the youngest brother of NBA players Giannis, Thanasis, and Kostas.

Antetokounmpo was born in Sepolia, a neighbourhood in Athens, Greece. He is the son of Nigerian parents, Veronica and Charles Antetokounmpo. He has a Nigerian passport, which was granted to him in June 2013, so that he could gain a visa, and be allowed to legally enter into the United States.

He received Greek citizenship in 2016. He started playing basketball at age nine, and in sixth grade, moved with his family to Milwaukee, where his older brother Giannis was playing his rookie season for the Milwaukee Bucks of the National Basketball Association. He attended St. Monica School in Whitefish Bay, Wisconsin and initially did not speak English.

Three of his older brothers, Giannis, Thanasis and Kostas, play basketball professionally, and all three have won NBA championships. Giannis and Thanasis play for the Milwaukee Bucks, and Giannis was named NBA Most Valuable Player in both 2019 and 2020.

Additionally, Thanasis and Giannis both won the NBA championship in 2021, with Giannis being named as Finals MVP. Kostas plays for the LDLC ASVEL & won an NBA title with the Los Angeles Lakers in 2020. Antetokounmpo’s father and his oldest brother, Francis, played football in Nigeria. His mother was a high jumper.

The small forward is not dating anyone right now. He is single but definitely not ready to mingle. Alex is quite focused on his growing basketball career and the upcoming NBA Draft. Hence, all of his attention goes to basketball. Likewise, he is a full-time professional basketball player living in Spain, so he has very little time between training and games to devote to romantic relationships and girlfriends.

Alexandros Emeka “Alex” Antetokounmpo is a Greek professional basketball player for UCAM Murcia of the Spanish Liga ACB who has an estimated Net Worth of $2 Million in 2022.

Antetokounmpo played basketball for Dominican High School in Whitefish Bay for four years. As a freshman, he averaged 2.9 points per game, and grew about 12 cm (five inches) to 2.03 m (6 ft 8 in) by the time he was a sophomore.Antetokounmpo was a two-time all-state selection and averaged 20 points and seven rebounds per game as a senior.

He received scholarship offers from DePaul, Ohio and Green Bay.On 9 May 2020, Antetokounmpo announced that he would play in Europe after graduating from high school, rather than playing college basketball. He was considered a three-star recruit by major recruiting services.

On 22 June 2020, Antetokounmpo signed a three-year contract with UCAM Murcia of the Liga ACB. On 18 October, he made his debut for the club’s reserve team in the Liga EBA, recording 28 points and six rebounds, shooting 6-of-9 from three-point range, in an 83–69 win over SCD Carolinas.

Alex Antetokounpmo was a three-star recruit before heading overseas to play pro in Europe. He’s a much better shooter than Giannis is and, albeit smaller (6’7” with a 7’1” wingspan compared to Giannis’ 6’11” and 7’4” wingspan) he can still grow some more.Alex has already worked out with the Indiana Pacers and is expected to be taken somewhere in the second round of the draft. Whether he’ll join the NBA right away or decides to stay a little longer in Europe is yet to be seen.