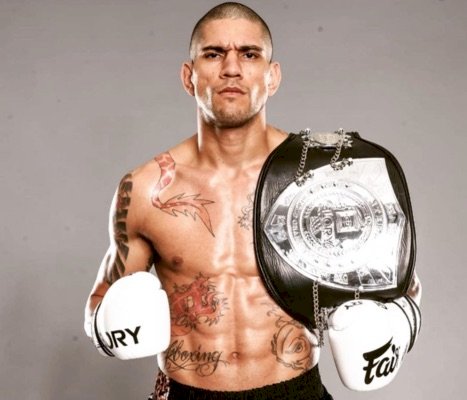 Alex Pereira or sometimes Alex Sandro, is a Brazilian kickboxer and mixed martial artist who competes in the middleweight division.

Growing up in a favela, Pereira dropped out of middle school to begin working in a tire shop at the age of 12.Influenced by his colleagues, he began drinking and eventually became an alcoholic. In 2009 he began training kickboxing in order to get rid of his addiction.Alex Pereira is the brother of Aline Pereira, who is also a professional kickboxer at Glory Kickboxing.

Alex Pereira keeps his personal life private so there is no any information available on social media about his marital and relationship status.

Alex Pereira is a Brazilian kickboxer and mixed martial artist who competes in the middleweight division who has an estimated Net Worth of $4 Million in 2022.

He won the Glory 14: Zagreb – Middleweight Contender Tournament in Zagreb, Croatia on 8 March 2014, beating Dustin Jacoby by first-round knockout in the semi-finals and Sahak Parparyan by majority decision in the final.

It was announced during the Glory 15: Istanbul broadcast that Pereira would be one of eight fighters competing in the Glory 17: Los Angeles – Last Man Standing middleweight tournament in Inglewood, California, United States on 21 June 2014.He lost to eventual champion Artem Levin by unanimous decision in the quarter-finals to exit the tournament.

Pereira met Yousri Belgaroui at the Glory 40 and Glory 49 Superfight Series, and then in 2018 in New York Madison Square Garden at the Glory 55 for the Middleweight Title Match, where Belgaroui had received the overhand right knockout at 2:29 of Round 1. For Pereira, it was the 28th career victory and the sixth inside the Glory ring.

After winning the Light Heavyweight Championship, Pereira opted to defend his middleweight title against Ertugrul Bayrak at Glory Collision 2 on December 21, 2019. After largely dominating the first round, he won the bout via knockout at the end of the round.

Pereira made his professional mixed martial arts debut against Quemuel Ottoni at Jungle Fight 82 on October 24, 2015. He lost the fight via third-round submission.

Subsequently racking up two straight victories, Pereira announced he had signed a contract to face Diego Henrique da Silva in the Brazilian edition of Dana White’s Contender Series on August 10, 2018.However, the bout never materialized as Glory did not permit Pereira to compete.

On October 22, 2020, news surfaced that Pereira had signed a contract with Legacy Fighting Alliance and he then made his promotional debut against Thomas Powell on November 20, 2020. He won the fight with a counter left hook knockout.On September 3rd, Pereira signed with the UFC. He’s expected to make his promotional debut against Andreas Michailidis on November 6, 2021 at UFC 268.