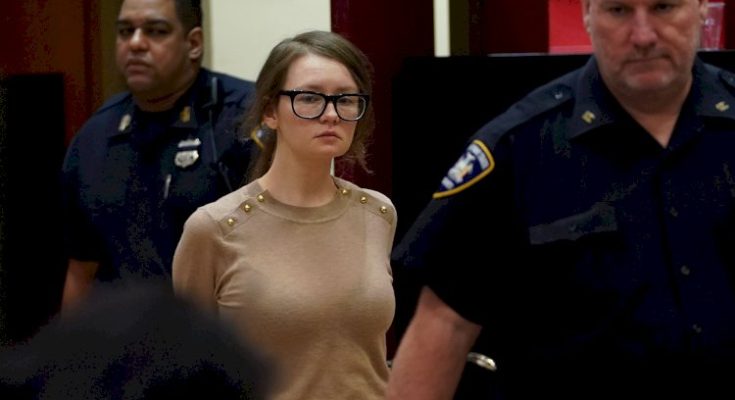 Anna Delvey is a Russian-German convicted fraudster. Between 2013 and 2017, while living in the U.S., she pretended to be a wealthy German heiress under the name Anna Delvey in order to defraud banks, hotels, and wealthy acquaintances. She was convicted of multiple counts of attempted grand larceny, larceny in the second degree, and theft of services in relation to these offenses in 2019. A television adaptation of her story titled Inventing Anna was developed by Netflix.

Anna Delvey ( Sorokin ) was born on 23 January 1991 in Domodedovo,a working-class satellite town southeast of Moscow. She was one of two children of the family.Her father worked as a truck driver, while her mother owned a small convenience store before becoming a housewife.

Sorokin was later described by a Russian classmate as “an excellent student” and “strong in character”, but she could “easily offend”.The family relocated to Germany in 2007, when Anna was 16.She attended the girls’ gymnasium in Eschweiler and was described by peers there as a quiet girl who had a difficult time with the German language.

Sorokin graduated from high school in 2011 and relocated to London to attend Central Saint Martins, but quit and returned to Germany. She worked as an intern at a public relations company before relocating to Paris to begin an internship for the French fashion magazine Purple.At that time, she started calling herself Anna Delvey; her parents have said that they “do not recognize the surname”

Netflix paid Anna Sorokin, who posed as a German heiress named Anna Delvey, $320,000 for the rights to her life story.Sorokin has used $199,000 of the money to pay restitution to the banks, plus another $24,000 to settle state fines, according to records reviewed by Insider.

During April 2017, Sorokin deposited $160,000 worth of fraudulent checks into a Citibank account, of which she was able to retrieve $70,000 in usable funds.She then wired a portion of these funds to 11 Howard to pay the outstanding bill. However, since she still refused to provide a credit card, the hotel evicted her.

The next month, she successfully convinced charter flight booking service Blade to allow her to book a return flight to Omaha, Nebraska, without paying the $35,390 fee up front. Upon returning from Morocco during May, Sorokin relocated to the Beekman Hotel, again managing to book without leaving a credit card on file. Around three weeks later, having accumulated a bill of $11,518 and failing to pay despite repeated promises, the Beekman also evicted her.

A grand jury was convened in August 2017 to consider the charges against Sorokin.It eventually indicted her on two counts of attempted grand larceny in the first degree, three counts of grand larceny in the second degree, one count of grand larceny in the third degree, and one count of misdemeanor theft of services.The most serious charge related to the fraudulent loan application made to City National Bank and Fortress Investment Group, with the other larceny charges relating to the instances of check fraud and the incident in Morocco. The theft of services charge related to Sorokin’s failure to pay hotel and restaurant bills.

Sorokin was arrested on 3 October 2017, in a sting operation planned by Michael McCaffrey, an NYPD police officer working with the Manhattan District Attorney’s office. At the time, Sorokin was staying at Passages Malibu, an addiction treatment facility in Los Angeles County, California. Officer McCaffrey had Rachel Williams, Sorokin’s former friend, arrange a lunch meeting at a restaurant near the facility in order to convince Sorokin to leave. When Sorokin left the facility, she was arrested by officers from the Los Angeles Police Department.On 26 October 2017, Manhattan District Attorney Cyrus Vance Jr. formally announced the indictment against Sorokin and asked for any other victims to make themselves known.

Where is Anna Delvey Now ?

On 18 December 2018, Sorokin appeared in New York City Criminal Court and rejected a plea deal that offered three to nine years in prison; a trial starting on 20 March 2019 was initially set by Judge Diane Kiesel. On 9 May 2019, Sorokin was given a sentence of 4 to 12 years in state prison, fined $24,000, and ordered to pay restitution of about $199,000.Sorokin was incarcerated at Rikers Island during the trial. After the trial, Sorokin, inmate #19G0366 of the New York State Department of Corrections, was initially housed at Bedford Hills Correctional Facility before being transferred to Albion Correctional Facility.

Sorokin was released from prison on 11 February 2021.In March 2021, she was taken back into custody by Immigration and Customs Enforcement (ICE) for overstaying her visa. As of 2 April 2021, she was being held in a New Jersey county jail awaiting deportation to Germany, and was still in ICE custody on 28 September 2021. Sorokin received $320,000 from Netflix for her life story, which she used to pay restitution to her victims.

How much money did Anna Delvey steal?

From 2013 to 2017, Delvey infiltrated elite circles in New York City and, over a 10-month period, scammed contacts out of US$275,000 after claiming she was expecting to inherit US$67 million.

How much did Netflix pay Anna Delvey?

Anna Delvey has been paid $320,000 by Netflix for the rights to tell her story in the form of the Shonda Rhimes-produced limited series Inventing Anna.

Read Also : Adam Lambert “These Are Your Rights”in an animated musical show “We the People”