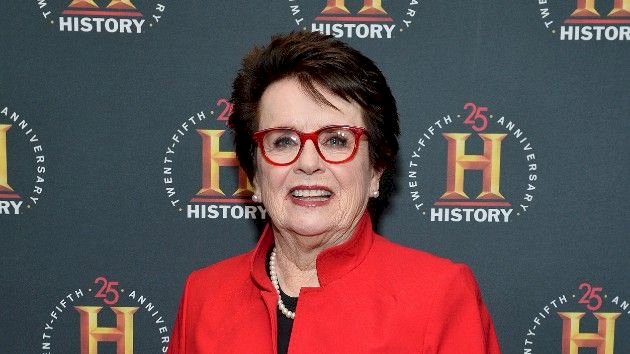 King is an advocate for gender equality and has long been a pioneer for equality and social justice.In 1973, at age 29, she won the “Battle of the Sexes” tennis match against the 55-year-old Bobby Riggs. She was also the founder of the Women’s Tennis Association and the Women’s Sports Foundation. 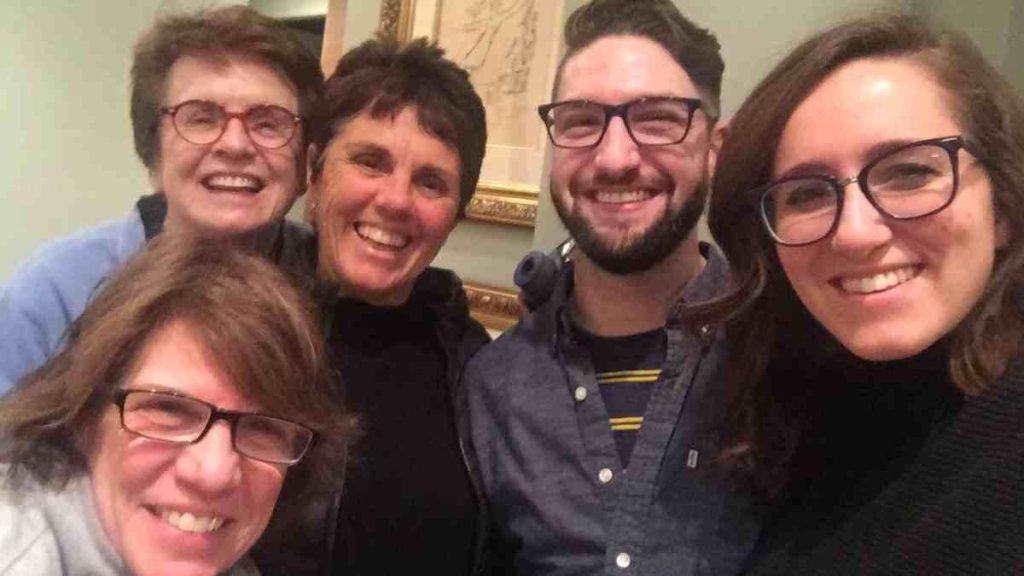 Billie Jean Moffitt was born in Long Beach, California, into a conservative Methodist family, the daughter of Betty (née Jerman), a housewife, and Bill Moffitt, a firefighter. Her family was athletic; her mother excelled at swimming, and her father played basketball and baseball, and ran track.Her younger brother, Randy Moffitt, became a Major League Baseball pitcher, pitching for 12 years in the major leagues for the San Francisco Giants, Houston Astros, and Toronto Blue Jays.

She also excelled at baseball and softball as a child, playing shortstop at 10 years old on a team with girls 4–5 years older than her.The team went on to win the Long Beach softball championship.She switched from softball to tennis at age 11,because her parents suggested she should find a more ‘ladylike’ sport.She saved her own money, $8, to buy her first racket.She learned tennis on the many free public courts in Long Beach, taking advantage of the free lessons tennis professional Clyde Walker offered at those courts. 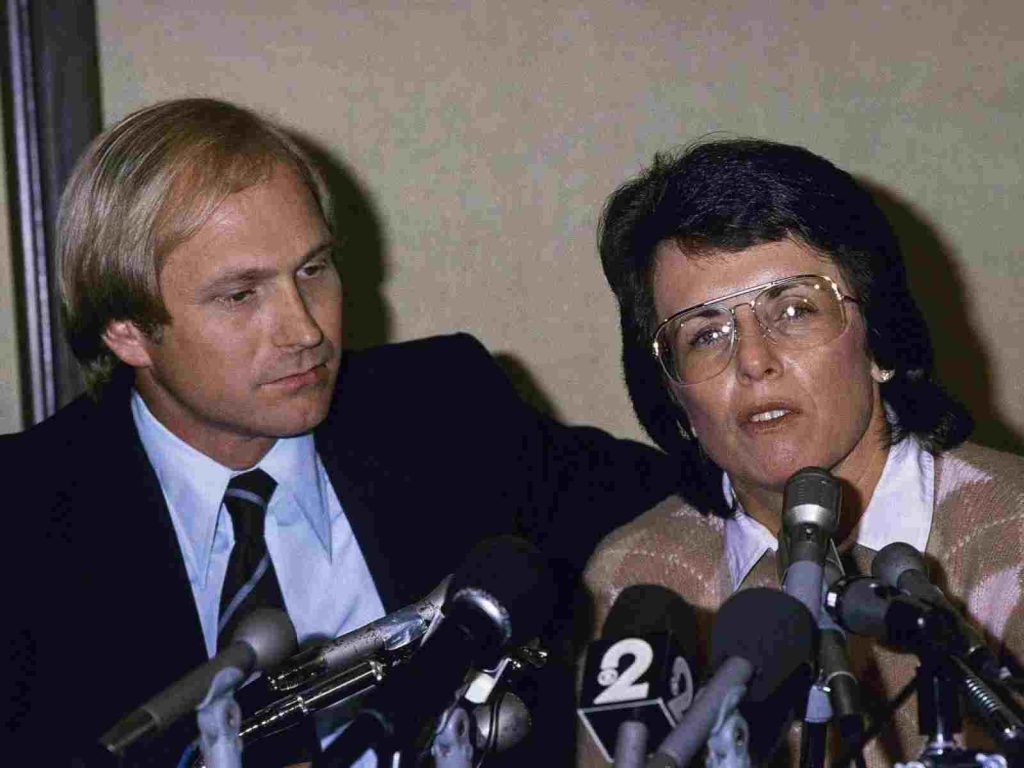 Billie Jean and Larry King were engaged in fall of 1964 and married in Long Beach, California, on September 17, 1965. Billie Jean credited Larry with introducing her to feminism and for pushing her to pursue tennis as a career.Billie Jean later said she “was totally in love with Larry” when they married.By 1968. 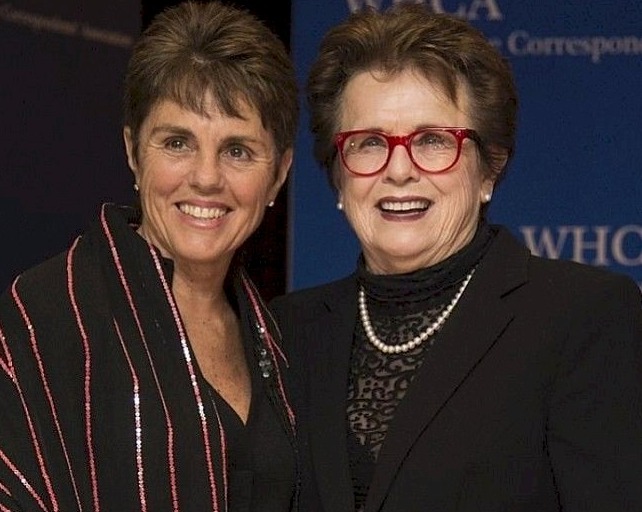 King realized that she was attracted to women.In 1971, she began an intimate relationship with her secretary, Marilyn Barnett (born Marilyn Kathryn McRae on January 28, 1948). Marilyn Barnett had been living rent-free in Billie Jean and Larry King’s Malibu house.

Billie Jean and Larry remained married through the palimony suit fallout.The marriage ended in 1987 after Billie Jean fell in love with her doubles partner, Ilana Kloss.Larry King and Billie Jean remained close even after her outing and Billie Jean served as godmother to Larry’s son from his subsequent marriage.Billie Jean King has residences in New York City and Chicago with Kloss, her wife.On October 18, 2018, King and Kloss were married by former New York City Major, David Dinkins, in a secret ceremony.

Billie Jean King is an American former female World No. 1 professional tennis player who has an estimated Net Worth of between $20 million in 2022. The earnings listed mainly come from her salary and brand endorsements.

In 1958, King emerged as a talent to watch when she won the Southern California championship for her age bracket, and in 1959, she started to receive coaching from former women’s tennis great Alice Marble. After a series of losses to top-seeded players in various competitions around the country, King made sports headlines for the first time in 1961, when she and Karen Hantze Susman became the youngest pair to win the Wimbledon women’s doubles title.

While attending California State University, Los Angeles, from 1961 to 1964, King continued to compete in tournaments and also worked as a tennis instructor to make ends meet. However, after achieving mixed results in several of the competitions, King realized that she would need to step up her practice schedule if she wanted to reach her full potential, and she embarked on an exhaustive training regimen and worked on sharpening her fundamentals.

After a few years of promising play, King won her first major singles championship at Wimbledon in 1966. She went on to successfully defend that title in each of the following two years, and added her first U.S. Open singles championship in 1967 and her only Australian Open triumph the following year. In 1968, having claimed the world’s No. 1 ranking in women’s tennis, King turned professional.

Renowned for her speed, net game and backhand shot, King was a regular presence in the winner’s circle in singles, doubles and mixed-doubles tournaments over the next few years. In 1972, she won the U.S. Open, French Open and Wimbledon to claim three Grand Slam titles in one year. King announced her retirement from singles play after winning Wimbledon in 1975, but she resumed singles competition two years later and continued through 1983. In the meantime, she remained a force in doubles for many years, winning Wimbledon in 1979 and the U.S. Open in 1980. She continued to play WTA doubles matches sporadically, until retiring for good in 1990.Altogether, King won 39 major singles, doubles and mixed doubles championships, including a record 20 at Wimbledon.

‘Battle of the Sexes’

For all her tennis accomplishments, Billie Jean King is probably best known for her 1973 match against former men’s champion Bobby Riggs, dubbed the “Battle of the Sexes.” The 55-year-old Riggs had assumed an overtly chauvinistic public persona to bait the sport’s top women into playing him, and after he easily defeated multi-time champion Margaret Court in the “Mother’s Day Massacre” of May 1973, he secured King as his next opponent.

The match took place on September 20, 1973, at the Houston Astrodome. Embracing the spectacle of the event, King entered the court in a gold litter carried by four muscular men, while Riggs rolled in on a rickshaw pulled by a team of women called “Bobby’s Bosom Buddies.” But King was all business once the match started, and she handily beat Riggs in straight sets before an estimated television audience of 90 million viewers.

Afterward, King acknowledged the pressure she felt that day. “I thought it would set us back 50 years if I didn’t win that match,” she said. “It would ruin the women’s tour and affect all women’s self-esteem.”