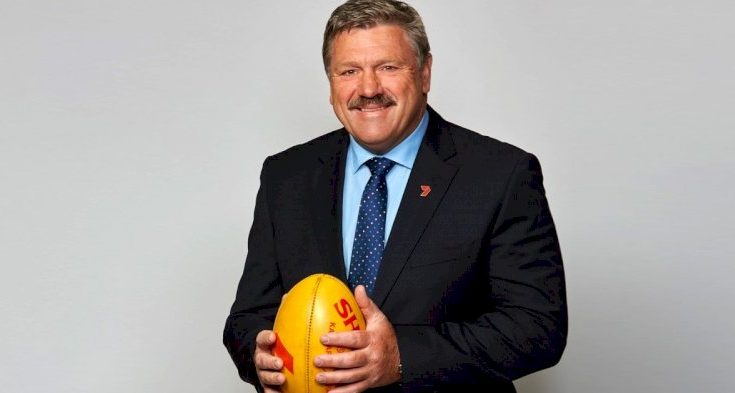 Brian Taylor is a former Australian rules footballer and current Australian Football League (AFL) commentator on television for the Seven Network. He played with Richmond and Collingwood from 1980 to 1990.

Towards the end of his playing career, Taylor was approached to write a weekly column in the Sunday Herald newspaper. He kept a diary throughout the 1990 season, publishing it as Black and White: The Taylor Diaries.

Taylor was only 16 when recruited from Mandurah, Western Australia, to the Richmond Football Club.The moustached Taylor, known as “BT” and “Bristle”, began his VFL career with Richmond in 1980.

He was a full-forward at the same club as the legendary Michael Roach. This limited his playing opportunities, and so he asked to be transferred to Collingwood after the 1984 season,having played 43 games and kicking 156 goals. His height was 191 cm and his weight was 102 kg.

Brian Taylor is married with Tania Taylor and the couple have a child together.

Australian rules footballer and current Australian Football League commentator on television for the Seven Networkwho has an estimated Net Worth of between $2.5 million in 2022.

Taylor joined Collingwood in 1985 . He kicked 100 goals in 1986 to win the Coleman Medal. Due to repeated knee injuries, he retired from playing in the AFL at the end of the 1990 season at 28 years of age. He had played 97 games for Collingwood, kicking 371 goals.

In 1991 Taylor became playing coach of Prahran in the VFA. In 1992, after he had kicked 16 and 9 goals in the opening two rounds, his knee gave way and he retired from playing after finishing that season with 64 goals. Continuing as coach, he again took the Two Blues to the finals. He retired as coach shortly before the 1994 season due to media commitments.

Towards the end of his playing career, Taylor was approached to write a weekly column in the Sunday Herald newspaper. He kept a diary throughout the 1990 season, publishing it as Black and White: The Taylor Diaries.On radio, Taylor started out with 3UZ in 1991 before becoming was the lead commentator for the Triple M commentary team from 1997 when the station became the first FM radio station to broadcast Australian rules football matches.

In 2010, he joined 3AW’s football commentary team as chief football caller, replacing Rex Hunt who had moved to Triple M to call football on Saturday afternoons.Taylor called the Friday night and either the Saturday or Sunday afternoon game for 3AW, alternating with Tony Leonard subject to commitments with the Seven Network.

On television, Taylor was an AFL commentator for the Nine Network until the station lost the broadcasting rights in 2006 to the Seven Network. He remained with the station as a panellist on The Sunday Footy Show until 2010 while also being the host of AFL Teams on Foxtel and calling the Sunday afternoon or twilight match on Fox Sports.

From the start of the 2012 season, Taylor started calling Saturday night matches for the Seven Network and was contracted until the end of the 2016 season. In 2012 he also hosted Seven’s pre and post match coverage of the grand final with his fellow Saturday night commentators, with Bruce McAvaney and Dennis Cometti calling the match.

During this live segment he roves around in the winning teams’ change rooms collecting ad-lib interviews with players. Often catching them off-guard, Taylor manages to get some candid, off-the-cuff comments from players, coaches, relatives, and other AFL identities, which provide some entertaining moments for viewers. Players are usually willing to be interviewed, though in 2018 he was rebuffed by Richmond’s Toby Nankervis.