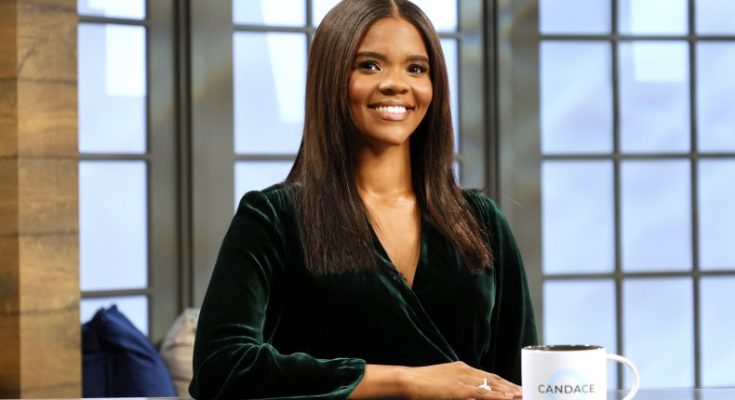 With her siblings, Owens was raised in Stamford, Connecticut, by her grandparents from around the age of 11 or 12, after her parents divorced. She was the third of four children.She said her paternal grandfather Robert Owens, a Black American, was born in North Carolina.

Owens is also of Caribbean American heritage through her grandmother who is originally from Saint Thomas, U.S. Virgin Islands.She is a graduate of Stamford High School.In 2007, while a 17-year-old senior in high school, Owens said she received three racist death threat voicemail messages, totaling two minutes, from a group of white male classmates.

Owens became engaged to George Farmer in 2019 ,an Englishman and former chairman of Turning Point UK.On August 31, 2019, she and Farmer married at the Trump Winery in Charlottesville, Virginia.Owens gave birth to a boy in January 2021.

Candace Owens has an estimated Net Worth around $3 Million in 2022.Candace Amber Owens Farmer is an American conservative author, talk show host, political commentator, and activist.

Candace Owens reportedly earned upwards of $200,000 annually working at Turning Point USA. Considering that she worked in the conservative advocacy group for two years, it’s safe to assume that she earned a total of $400,000 from the job.

In 2015, Owens was CEO of Degree180, a marketing agency that offered consultation, production, and planning services.The website included a blog, written by Owens, which frequently posted anti-conservative and anti-Trump content, including mockery of his penis size.

Owens launched SocialAutopsy.com in 2016, a website she said would expose bullies on the Internet by tracking their digital footprint.

The site would have solicited users to take screenshots of offensive posts and send them to the website, where they would be categorized by the user’s name.She used crowdfunding on Kickstarter for the website.

By late 2017, Owens had started producing pro-Trump commentary, and criticism of liberal rhetoric regarding structural racism, systemic inequality, and identity politics – liberal rhetoric she herself had been publishing two years earlier.In 2017, she began posting politically themed videos to YouTube.

In May 2018, Owens suggested that “something bio-chemically happens” to women who do not marry or have children, and she linked to the Twitter handles of Sarah Silverman, Chelsea Handler, and Kathy Griffin, saying that they were “evidentiary support” of this theory.

During The Daily Wire’s coverage of the 2020 U.S. Election, Owens announced she would be joining The Daily Wire and would be hosting her own show. Owens later said in a tweet, “The rumors are true. I’m moving to Nashville and joining the Daily Wire!! This was a tough secret to keep. I couldn’t be more excited!!”Her podcast Candace premiered on the platform on March 19, 2021.