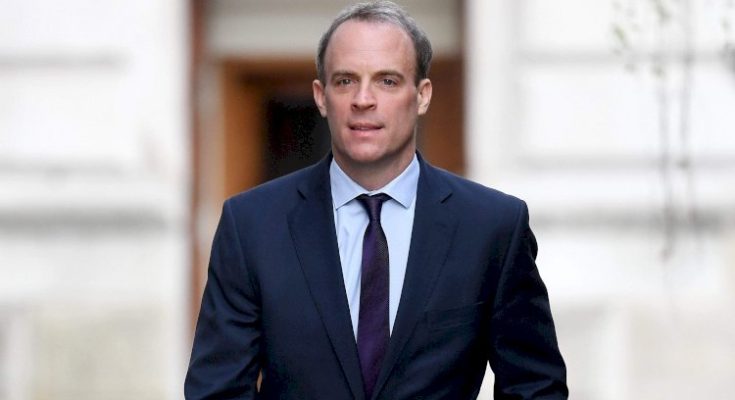 Dominic Rennie Raab is a senior British politician, serving as First Secretary of State and Secretary of State for Foreign Affairs since July 2019. A member of the Conservative Party, he has been Member of Parliament (MP) for Esher and Walton since 2010.

On 24 July 2019, Johnson appointed Raab Secretary of State for Foreign and Commonwealth Affairs and First Secretary of State. In September 2020, Raab was awarded the duties of the former post of International Development Secretary in addition to his role as Foreign Secretary.

Dominic Rennie Raab was born on 25 February 1974 in Buckinghamshire.He is the son of Jean, a clothes buyer, and Peter Raab, a food manager for Marks & Spencer. His father, who was Jewish, came to Britain from Czechoslovakia in 1938 aged six, following the Munich Agreement, which gave parts of Czechoslovakia to Nazi Germany.Raab was brought up in his English mother’s faith, in the Church of England. He grew up in Gerrards Cross, Buckinghamshire. Raab was twelve years old when his father died of cancer.

Raab attended Dr Challoner’s Grammar School, Amersham and spent a brief period as a volunteer on Kibbutz Sarid before studying law at Lady Margaret Hall, Oxford, where he had a room on the same corridor as future Channel 4 News presenter Cathy Newman.Raab spent his time at Oxford “doing a lot of karate” and captained the university karate team and graduated with a Bachelor of Arts in Jurisprudence.

Raab is married to Erika Rey, a Brazilian marketing executive who until 2020 worked for Google.They have two children, and live in Thames Ditton, Surrey.

Raab joined the Foreign Office in 2000, covering a range of briefs including leading a team at the British Embassy in The Hague, dedicated to bringing war criminals to justice. After returning to London, he advised on the Arab–Israeli conflict, the European Union and Gibraltar. He defended Tony Blair against a subpoena from former Yugoslav President Slobodan Milošević. From 2006 to 2010, he worked in Parliament as Chief of Staff to Shadow Home Secretary David Davis and to Shadow Secretary of State for Justice Dominic Grieve.

Raab was elected to Parliament at the 2010 election to represent Esher and Walton, a then-safe Conservative seat in Surrey, with a total of 32,134 votes (58.9% of the vote) and a majority of 18,593 over his nearest rival.

He lives in and commutes from Thames Ditton, in his constituency. Since being elected he has campaigned for fairer funding for local services in Elmbridge, stronger local democracy in the running of community hospitals in Cobham, Walton and Molesey and more visible and responsive policing, and against the construction of an M25 service station at Downside.

In the House of Commons, Raab spoke in support of the coalition government’s plans to cut the budget deficit, expand academy schools, repeal the Identity Cards Act 2006, and enact a Freedom Bill.He criticised the government for opting into the EU directive on the European Investigation Order, arguing it would strain operational policing resources, and would dilute safeguards protecting British citizens from misuse of personal data and guaranteeing a fair trial.

He came to media attention in August 2010, after requesting that the pressure group 38 Degrees remove his parliamentary email address from their website, arguing that lobby groups sending or coordinating ‘clone emails’ designed to deluge MPs’ inboxes detracted from their ability to correspond with constituents and help those in real need. 38 Degrees said that the email address is paid for by taxpayers’ money and is in the public domain, thus they have every right to host it on their website and use it for campaigning.

Raab has participated in debates on giving prisoners the vote and extradition. In April 2011, he also presented an ultimately unsuccessful Ten Minute Rule Bill proposing that emergency service and transport unions should be required by law to ensure that strike votes receive 50% support of union members. Raab argued that reform was needed to prevent “militant union bosses” holding the “hard working majority” to ransom.

On 7 March 2012, Raab opened a debate in the House of Commons on Sergei Magnitsky and Impunity for Gross Human Rights Abuses, calling on the UK government to bring forward legislative proposals that would allow it to impose visa bans and asset freezes on state officials responsible for gross human rights abuses against individuals. The motion was supported by three former Foreign Secretaries and two former Foreign Ministers and had cross-party support[28] and was passed unanimously by MPs.

On 30 January 2014, Raab proposed an amendment to the Immigration Bill to deport all prisoners given a sentence of a year or more. It was defeated, but allowed 99 members to voice that change was necessary to prevent immigrants convicted of crimes from using the ECHR as support to remain in the UK.

In the 2015 general election on 7 May, Raab retained his Esher and Walton seat with a majority of 28,000 votes over his nearest rival.On 12 May, he was appointed Parliamentary Under-Secretary of State at the Ministry of Justice under Michael Gove, with responsibility for human rights questions.In September 2015, in this capacity, he addressed representatives of the 46 other member states of the Council of Europe on the question of the UK’s blanket ban on prisoner voting.

In the 2017 general election, Raab was elected with a reduced majority of 23,000.In the 2019 general election, he was reelected with a significantly reduced majority of 2,743.In February 2018, Raab advertised for an unpaid intern just ahead of a Department for Business, Energy and Industrial Strategy (BEIS) publication responding to the Taylor review on insecure work. The BEIS report criticised “exploitative unpaid internships”, saying “an employer cannot avoid paying someone the minimum wage simply by calling them an ‘intern’ or saying that they are doing an internship.”

On 10 May 2021, Raab condemned the rocket attacks on Israel and called for “immediate de-escalation on all sides” and an “end to targeting of civilian populations”.On 15 August 2021, as the Taliban militant group once again controlled a vast majority of Afghan territory, the Taliban began capturing the capital city of Kabul. Raab was abroad on holiday when Kabul fell to the Taliban. He returned to the UK on 16 August and said the UK government was surprised by the “scale and pace” of the Taliban’s takeover of Afghanistan.