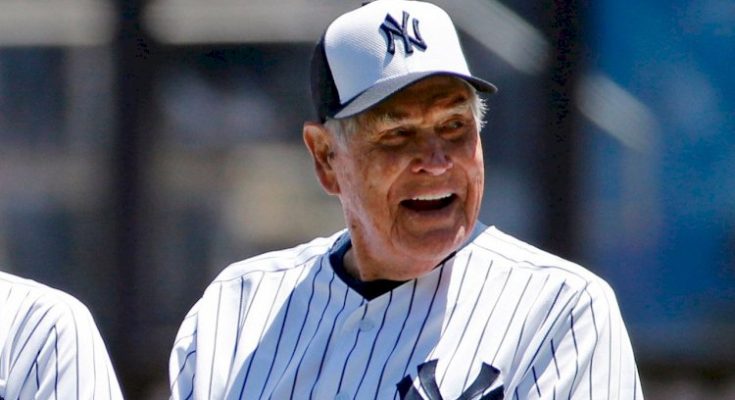 Eddie Robinson was born and grew up in the Northeastern Texas town of Paris. He was the only child of William Edward Robinson, an automobile electrician born in Missouri, and Hazel Robinson, born in Tennessee. Eddie’s father later left the family, and his parents divorced when Eddie was 12. He attended Paris Junior College.

Eddie Robinson married Elayne Elder in February 1943. They had two children, one of whom died in childhood, and divorced in 1951.He married the former Bette Farlow, a native of Pittsburgh, Pa., in 1955.The couple raised three sons — Marc, Drew and Paul.As of 1993 they had lived in Woodhaven Country Club Estates for 15 years and also grew and sold pecans from a farm near Austin.

Edward Robinson was an American Major League Baseball first baseman, scout, coach, and front office executive has an estimated Net Worth around $2.5 Million.

Eddie Robinson, a left-handed batter who threw right-handed, played four seasons in the minor leagues before being briefly called up at the end of the 1942 season by the Cleveland Indians. He enlisted in the US Navy after the 1942 season and did not resume his baseball career till 1946. He suffered a leg injury while in the service, and never fully recovered fully thanks to a botched operation, but he recovered sufficiently to enjoy an outstanding major league career.

Overall, he appeared in 1,315 games and batted .268 with 172 home runs and 723 runs batted in. Defensively, he finished his career with a .990 fielding percentage playing every inning at first base. He did not play in the 1943 through 1945 seasons, due to his service in the US Navy during World War II.

Upon retirement, he became a coach for the Baltimore Orioles and then moved into their player development department. A protégé of Orioles manager and fellow Texan Paul Richards, he followed Richards to the Houston Astros, then worked as the farm system director of the Kansas City Athletics during the tempestuous ownership of Charlie Finley in the mid-1960s. In 1968 he rejoined Richards in the front office of the Atlanta Braves. He succeeded Richards as general manager of the Braves during the 1972 season, serving through early 1976 in that post.

Robinson then returned to the American League as a member of the Texas Rangers front office. In 1977, Robinson was named co-general manager (with Dan O’Brien Sr.) of the Rangers, and became sole GM from 1978–82. Although the Rangers posted winning seasons in 1977, 1978 and 1981, a disastrous 1982 campaign cost Robinson his General Manager job.

Continuing in baseball as a scout and player development consultant, he found his last position as a scout for the Boston Red Sox, the only team of the “original eight” American League clubs that he did not play for.