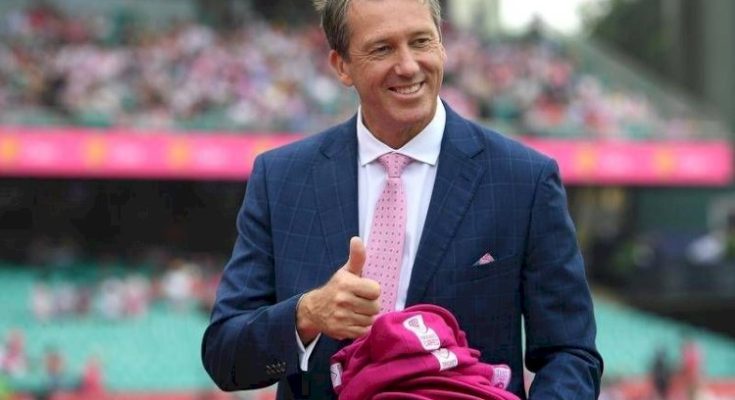 Glenn Donald McGrath AM is an Australian former international cricketer who played international cricket for 14 years. He was a fast-medium pace bowler and is considered one of the greatest Australian international bowlers of all time, and a leading contributor to Australia’s domination of world cricket from the mid-1990s to the late-2000s.Known throughout his career for maintaining an accurate line and length, McGrath displayed a consistency that enabled him to be one of the most economical and successful fast bowlers of his time. In terms of total career wickets taken by fast bowlers, McGrath is the second most successful of all time behind James Anderson.

McGrath was born in Dubbo to Beverly and Kevin McGrath.He grew up in Narromine, New South Wales (NSW), where he first played cricket, and his potential was spotted by Doug Walters.He moved to Sydney to play grade cricket for Sutherland and made his debut for NSW during the 1992–93 season. McGrath capped his rapid rise in the next Australian summer with selection in the Test team after only eight first-class matches.

Glenn’s first wife, Jane Louise , was born in the United Kingdom and had worked as a flight attendant before their marriage. Glenn and Jane met at a Hong Kong nightclub called “Joe Bananas” in 1995, and married in 2001. They had two children, James and Holly. Jane McGrath fought recurrent battles with metastatic breast cancer, having been first diagnosed in 1997. On 26 January 2008 (Australia Day) Glenn and Jane McGrath were both made Members of the Order of Australia. Jane McGrath died, aged 42, on 22 June 2008 from complications following cancer surgery.

Glenn McGrath met Sara Leonardi, an interior designer, during the 2009 Indian Premier League. They married at home in Cronulla on 18 November 2010.Their daughter was born in September 2015.

Glenn Donald McGrath AM is an Australian former international cricketer has an estimated Net Worth around $5 Million in 2022.

In 2002 Glenn and Jane founded the McGrath Foundation, a breast cancer support and education charity in Australia, which raises money to fund McGrath Breast Care Nurses in communities right across Australia and increase breast cancer awareness in young women. Since 2007, the third day of the first Test held in Sydney Cricket Ground is named Jane McGrath Day, even if the day is washed out.

Following the death of Jane in June 2008, Glenn accepted the voluntary role of Chairman of the Board of the McGrath Foundation, and he participates in many activities in support of the Foundation to ensure the fulfilment of its vision.As of April 2016, the McGrath Foundation has placed 110 McGrath Breast Care Nurses around Australia, who have helped support more than 33,000 Australian families.

McGrath played for Worcestershire in the 2000 English County Championship, proving both successful on the field and popular with the county’s supporters. In 14 first-class games he took 80 wickets at 13.21, including an outstanding innings return of 8–41 against Northamptonshire, as well as making his first-ever first-class half-century.He also played a few games for Middlesex in 2004; although accurate, he could manage only nine wickets in four first-class appearances for the county.

During the first Test at Lord’s in the 2005 Ashes series McGrath became the fourth bowler in history to take 500 Test wickets with the dismissal of Marcus Trescothick. This wicket was also the start of a productive spell of 5–2 that led to England being bowled out for 155. McGrath took 4–29 in the second innings and was named man of the match in a comprehensive Australian victory.

McGrath trod on a cricket ball and injured his ankle the morning before the start of the second Test at Edgbaston and was unable to play in the match, in which England amassed 407 runs in one day against the McGrath-less bowling attack to win by two runs. He was rushed back when not fully fit for the third Test at Old Trafford, where he earned another five-wicket haul in the second innings of a drawn game, batting in a last-wicket partnership with Brett Lee in the last hour of the Test to deny an English victory.

He then missed the fourth Test at Trent Bridge, which England won by three wickets, with an elbow injury. McGrath returned for the final Test at The Oval but he and the rest of the Australian team were unable to force a result and the match was drawn, giving England the series win. McGrath’s injury problems are seen as a key factor in England regaining the Ashes, as their victories came in matches in which he was absent.

On 23 December 2006, McGrath announced his retirement from Tests. His last Test was the fifth Ashes Test against England in Sydney in January 2007,where he took a wicket with the last ball of his Test career. He retired from all forms of international cricket following the successful 2007 Cricket World Cup, at which he became the leading wicket taker in the history of the World Cup, while also being the tournament’s top wicket taker with 26 and being named player of the tournament. He was named in the ‘Team of the Tournament’ by ESPNCricinfo for the 2007 World Cup.