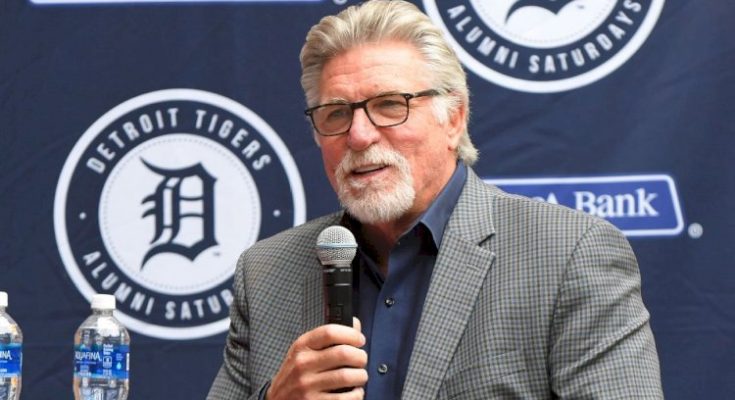 John Scott Morris  is an American former professional baseball starting pitcher. He is a former color commentator for the Detroit Tigers on Bally Sports Detroit. He played in Major League Baseball (MLB) between 1977 and 1994, mainly for the Detroit Tigers. Morris won 254 games throughout his career.

Since retiring as a player, Morris has worked as a broadcast color analyst for the Blue Jays, Twins, and Tigers. He has also been an analyst for MLB broadcasts on Fox Sports 1. Morris was inducted into the Baseball Hall of Fame in 2018. John Scott Morris is a married man. He Maried Twice Jennifer Morris and National .Morris has two sons from his first marriage and one with his second.

John Scott Morris is an American former professional baseball starting pitcher who has an estimated Net Worth of between $10 million in 2022.

The Detroit Tigers selected Morris in the fifth round of the 1976 MLB draft.He was first called up to the Tigers in 1977 after Mark Fidrych was placed on the disabled list with an injury.

Morris broke into the Tigers’ starting rotation in 1979, posting a 17–7 record and a 3.29 ERA and establishing himself as the ace of the Detroit staff. Morris, along with catcher Lance Parrish, shortstop Alan Trammell, second baseman Lou Whitaker, outfielder Kirk Gibson, and manager Sparky Anderson, played a notable role in turning the Tigers into a contending team for most of the 1980s.

In 1980, Morris learned to throw the split-finger fastball from newly hired pitching coach Roger Craig, and it became an effective pitch for the rest of Morris’ career. He led the major leagues with 14 wins in the strike-shortened 1981 season.

Despite playing for the notorious “Captain Hook” (Anderson), nicknamed because of his tendency to pull his starters at the first sign of weakness, Morris was known for finishing what he started. He racked up 175 complete games in his career (154 with Detroit). He compiled double-digit complete game totals in 10 of his 12 full seasons as a Tiger. In 1983, Morris completed 20 of his 37 starts. That year, he led the league in innings pitched (293.2), batters faced (1204) and strikeouts (232), while posting his first 20-win season.

On April 7, 1984 (on NBC’s nationally televised Game of the Week), Morris no-hit the Chicago White Sox at Comiskey Park,beginning what would be an excellent season for both him and the Tigers. The no-hitter was the first by a Tiger since Jim Bunning in 1958. By the end of the 1984 campaign, he had notched 19 wins and a 3.60 ERA, leading Detroit into the postseason.

He scored a win over the Kansas City Royals in the ALCS, and added two more complete-game victories in the World Series against the San Diego Padres as the Tigers concluded their wire-to-wire 1984 campaign with the World Championship. While teammate Alan Trammell was named World Series MVP, Morris was given the Babe Ruth Award for most outstanding performance in the 1984 postseason.

In 1986, Morris racked up 21 wins, and had a stretch from July 9–18 in which he threw three consecutive complete game shutouts.The Tigers headed to the postseason again in 1987 behind a team-leading 18 wins from Morris, but this time Morris’ postseason performance was below expectations. He lost his only start in the ALCS, surrendering six runs in eight innings to the eventual World Champion Minnesota Twins.

Despite a sub-par season in 1989 when he made only 24 starts and won just 6 games, he finished the 1980s with 162 wins, the most by a major league pitcher during the decade. In 1990, his final season in Detroit, Morris lost a career-high 18 games, though he also led the Tiger staff with 15 wins and led the AL with 11 complete games.Morris had a 3–1 post-season record as a Tiger, with a 2.73 ERA.

In 2013, Morris joined Sportsnet as a color analyst for Toronto Blue Jays radio broadcasts, as well as making appearances on television broadcasts.In 2014, he served as a pre- and post-game analyst for Twins telecasts on Bally Sports North (as well as a part-time substitute for regular game analyst Bert Blyleven) and as a regular on-air contributor on KTWN-FM and the Twins Radio Network.

On February 10, 2015, it was announced that Morris had been hired as a part-time analyst for Detroit Tigers telecasts on Fox Sports Detroit, along with former teammate Kirk Gibson.In a unique arrangement, Morris continued to work part-time for the Twins’ television crew as well as the Tigers’.In 2017, it was announced that Morris would no longer do Tigers telecasts. On January 15, 2019, Morris was once again named a color commentator for the Tigers.

On August 18, 2021, Morris made a racist joke during a broadcast while Shohei Ohtani of the Los Angeles Angels was at bat. Later during the broadcast, he issued an on-air apology. Following this incident, Morris was suspended indefinitely from the Tigers’ broadcast booth.