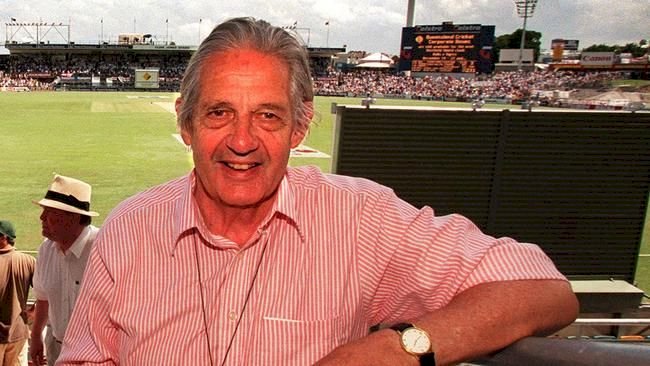 John Charles Woodcock OBE was an English cricket writer and journalist.He was born at Longparish, Hampshire, where he also lived later in life, and was dubbed “the Sage of Longparish” by Alan Gibson. He was a contributor to the Longparish Village Handbook.

He went on the britain tour of Australia in 1950-51 as a newsreel cameraman for the BBC. He subsequently worked for the Manchester Guardian for a few of years.

The Woodcock family had moved from Longparish in 1933 when his father had retired, but John returned in 1947 and, with a succession of springer spaniels, with crickety names like Gully or Stumper, lived within the Old Curacy until he died there.Woodcock attended Trinity College, Oxford, and won hockey Blues in 1946 and 1947. He retained the advowson, which now reverts to the bishop. it had been an ideal place to write down his memoirs but, despite endless pleas from publishers, he never did.

At the 2018 Sports Book Awards evening he received a special award for Outstanding Contribution to Sports Writing. Henry Blofeld said at the event, “John Woodcock is that the most thorough watcher of a day’s cricket I’ve ever known.” He died at the age of 94 on 18 July 2021.Eventually John became linked to the past during a way that has got to are on the brink of unique – astonishingly, his grandfather, also named John, was born before the Battle of Waterloo, in 1813.

He fathered a son in 1856, Parry Woodcock, who became rector of Longparish in 1906, a meeting helped along because the Woodcock family had held the proper of “advowson” (choosing the rector) since 1762. Years later a young widow, Nora Dunsford (nee Hutchinson), came back to the village after her husband was killed during a train crash in India. There she met and married the bachelor rector, who fathered two sons – to the ribald delight of the villagers. John was the younger, born within the rectory when his father was 70.

Longparish lies beside the River Test, the famous trout stream, and Parry was an expert fisherman. The boy showed promise at angling too, but that was soon superseded by the sport that became his life. He was a successful batsman, strong off the rear foot, and was developing rapidly at St Edward’s school, Oxford. Then disaster struck.

At the age of 15, John contracted septic arthritis and nearly died. He survived after four months strapped to a frame, and was left with a permanently damaged hip. Nonetheless, he captained his Oxford college, Trinity, top scored within the university trial match without making the team, and was a hockey blue as a goalkeeper.

He graduated in geography with a now-impossible fourth-class degree (“I was very lazy”), then gained an education diploma and was ready for a career in teaching. However, at Oxford he had come under the aegis of EW Swanton, and Swanton got him employment scoring for the BBC at the 1948 Lord’s Test.

This wasn’t a hit , but Swanton, already famous as a broadcaster and therefore the Daily Telegraph’s cricket correspondent, persevered. On the 1950-51 Ashes tour he took Woodcock to Australia as his assistant – duties to incorporate chauffeuring, whisky-pouring, filming the tour with a huge 35mm camera and airmailing 40,000 feet of film range in weekly instalments to be shown on BBC newsreels a minimum of every week late.

Woodcock also did some writing, and this was a success. On the tour Denys Rowbotham, cricket correspondent of the Manchester Guardian, fell in love and later went back to Australia, leaving his paper with no one to cover the 1952 Tests against India. Woodcock was taken on, and his byline read “A Cricket Correspondent” with the coy initials JW underneath.