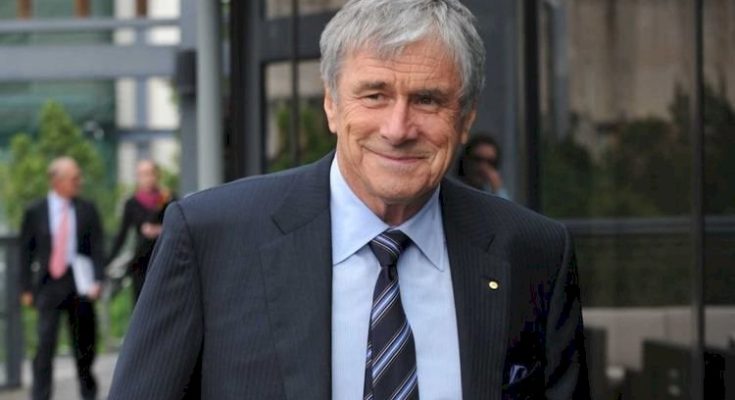 Kerry Matthew Stokes AC is an Australian businessman. He holds business interests in a diverse range of industries including electronic and print media, property, mining, and construction equipment. He is most widely known as the chairman of the Seven Network, one of the largest broadcast repeating corporations in Australia.

John Patrick Alford was born in Melbourne, Victoria, Australia. His unmarried mother was Marie Jean Alford. Stokes was adopted by Matthew and Irene Stokes and grew up in Camp Pell, a slum housing area. He later dropped out of school at age 14. In June 2000, Stokes told the ABC,” My background was very difficult, very hard and I wouldn’t wish that on anybody. I had lots of different occupations and obviously lots of different experiences. I had some time on the street, and sometimes, work was very difficult. Australia, in that period of time, wasn’t a place where you could actually easily go and get a job, it was difficult, and we went where there was work available”.

Stokes has been married four times. His first marriage was to Dorothy “Dot” Ebert, who is the mother of two of his children. In an interview with The Bulletin, it was implied that Stokes was estranged from his first family.

His second marriage was to his receptionist, Denise, with whom he had two sons. Denise walked out of the marriage and went overseas, and Stokes became a single father.

His third marriage was to Australian television actress Peta Toppano in 1992. This marriage lasted for three years. In 1996 he married his fourth wife, Christine Simpson née Parker, a newsreader for rival station Channel 10 when they first met. Stokes has three grandchildren.

Kerry Matthew Stokes AC is an Australian businessman who has an estimated Net Worth of between $7.18 billion 2021.

Stokes’ first reported job was to install television antennas in Perth, followed by a sustained period in property development throughout the 1960s and 1970s. He also developed a range of shopping centers in Perth and regional Western Australia with partners Jack Bendat and Kevin Merifield.

His private company, Australian Capital Equity (ACE), is the holding company for Stokes’ interests in a diverse range of Australian and international businesses and ventures covering property, construction, mining and petroleum exploration.

He invested in the Caterpillar franchise in Western Australia (Wigmores Ltd) in 1988, and the company subsequently called WesTrac has equipment dealer franchises in Western Australia, New South Wales, the Australian Capital Territory and nine provinces across China, with the total number of employees close to 4,000 people, as well as 500 apprentices in Australia.

In 2007, Stokes’ National Hire Group (over 50% owned by WesTrac) formed a joint venture with The Carlyle Group to acquire the equipment hire group Coates Hire.Stokes has always had a keen interest in the pastoral industry and acquired the 4,047 square kilometres (1,563 sq mi) Napier Downs station in the Kimberley, stocked with 20,000 head of Red Brahman cattle, from Peter Leutenegger in 2015 for an estimated A$23 million to A$40 million.

Stokes’s commercial interests in the media sector commenced in Western Australia, with the development of the Golden West Network, a regional television network based in Bunbury in partnership with Jack Bendat. In 1979 Stokes acquired Canberra’s local TV station Seven Canberra, subsequently acquiring Seven Adelaide from Rupert Murdoch and won the third commercial station licence in Perth, as well as acquiring radio stations in Victoria (including 3DB (Melbourne) and 3GL (Geelong), South Australia and Western Australia, through a vehicle called BDC. These assets were sold to Frank Lowy in 1987.

In 1996 Stokes acquired a strategic 19 per cent stake in the Seven Network, a network of commercial free-to-air television stations in Sydney, Melbourne, Brisbane and Adelaide, as well as regional Queensland and Perth. The platform, as well as a 33 per cent stake in Sky News Australia, reaches 98 per cent of Australians. Seven has also established a major magazine publishing business, Pacific Magazines, which accounts for more than 20 per cent of all magazines sold in Australia.

Also under Stokes’s leadership, Seven has established a leading online venture, Yahoo!7, combining Yahoo!’s search and online capabilities with Seven’s content and cross marketing. The venture is Australia’s most popular internet portal and the joint venture is driving a range of online and IPTV businesses.

Seven built and acquired several broadband businesses, including wireless broadband group Unwired (sold to Optus, and subsequently defunct), VOIP operator Engin and was the Australian licensee for TiVo, launched in 2008 and abandoned in 2014.

Stokes’s private company, in conjunction with Shanghai People’s Press, is no longer running a business after five years in Shanghai. and a second joint venture in mobile television with the Oriental Pearl Group in Shanghai.

Seven held the Australian broadcasting rights for the 2008 Summer Olympics in Beijing and provided the broadcast feeds for the swimming and diving events for the rest of the world. The International Olympic Committee awarded Seven the gold medal for its TV coverage of the Athens Summer Olympics in 2004.