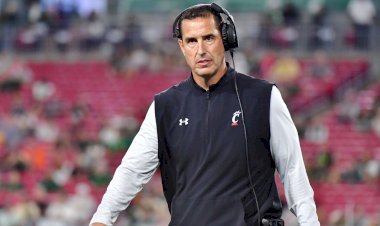 Luke was born on August 18th, 1973. Luke will be 48 years old in 2021. He is one of the highest-paid coaches in the world. He is ranked 45th, just ahead of five competitors: Louisville’s Scott Satterfield (48th), West Virginia University’s Neal Brown (52nd), Notre Dame’s Brian Kelly (60th), and Miami University’s Chuck Martin (114th). Luke travelled to Ohio State to finish his studies. In 1997, he earned his bachelor’s degree.

Luke Fickell is married with his wife Amy Goecke Fickell, his beautiful and loving wife. They’ve been together for at least 20 years. The couple is the proud parents of two pairs of twins. They have a total of six children, five of them are boys and one of whom is a girl.

Luke Joseph Fickell is an American football coach and former player has an estimated Net Worth around $4 Million in 2022.

Luke Fickell has finalized a contract extension through the 2026 season that will increase his salary to $3.4 million a year starting with the 2020 season through 2026. All of the extension is funded through private donations & fundraising, according to UC athletic director John Cunningham & the UC Board of Trustees.

After a brief stint in the NFL and at Ohio State as a graduate assistant in 1999, in 2000 Fickell was hired by the University of Akron as the defensive line coach.After two seasons with the Zips, he returned to Ohio State in 2002 as the special teams coordinator under second-year head coach, Jim Tressel, helping guide the team to the 2002 BCS National Championship.

In 2004, Fickell took over as the linebackers coach, adding the title co-defensive coordinator to his responsibilities in 2005.In 2010, he was named Assistant Coach of the Year by the AFCA, joining a list of Buckeyes coaches to be recognized by the association that also includes Carroll Widdoes, Woody Hayes, Earle Bruce, and Jim Tressel.

On December 10, 2016, Fickell was named as the 39th head coach of the University of Cincinnati, taking the place of the resigning Tommy Tuberville.2018 would be a historic turnaround of the program, finishing with an 11–2 record and a victory in the Military Bowl. Fickell was named AAC Coach of the Year for the 2018 season, which was only the third 11-win season in UC history.

Before the start of the 2020 season Fickell agreed to a contract extension which would keep him at Cincinnati through the 2026 season.Fickell had previously received head coaching interest from other schools such as Michigan State,Florida State,West Virginia,Louisville, and Maryland.Fickell was one of thirteen coaches named to the watchlist for the Bobby Dodd Coach of the Year Award before the 2020 season.

In 2020, Luke Fickell led the Cincinnati Bearcats to a 9–1 campaign including Cincinnati’s second perfect regular season which included winning the 2020 AAC Championship Game against the Tulsa Golden Hurricane. Cincinnati was selected for the 2021 Peach Bowl against the #9 Georgia Bulldogs. Both teams went into the game down a number of key players due to injury, illness, or opt–outs, including Cincinnati’s two All-Americans Ahmad Gardner and James Wiggins. After leading by a score of 21–10 entering the fourth quarter, Cincinnati ultimately fell to Georgia on a 53-yard field goal with 7 seconds left in the game, by final score of 24–21. Fickell was named AAC Coach of the Year for the second time in his career.