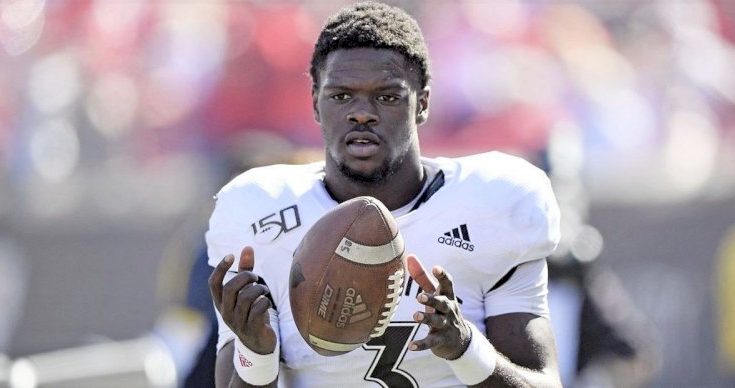 Micale Malik Cunningham is an American football quarterback for the Louisville Cardinals.In the NCAA college football tournament, he is one of the players from the team who can really pull off some unbelievable plays.

Malik is one of the best QBs in the competition so professional teams and their scouts will keep eagle eyes on his on-field game.

Malik Cunningham was born on 6th October 1998 in Montgomery, Alabama. His father’s name is Micheal and his mother’s name is Stacy. Moreover, he has a sister as a brother with whom he spent most of his childhood days.Cunningham attended Park Crossing High School in Montgomery, Alabama.During his career, he passed for 6,276 yards and 71 touchdowns, while rushing for 1,926 yards and 32 scores. He committed to the University of Louisville to play college football.

Micale Cunningham is not Married yet and there is no any information is available on social media about his relationship and Dating status.Currently he is focusing only on his career and goals.

Micale Malik Cunningham is an American football quarterback for the Louisville Cardinals who has an estimated Net Worth of $1 Million – $2 Million in 2022.

He has played quarterback at Park Crossing High School with his team and led his team to score for the Alabama Class 6a semifinals in 2016. In that season, the game averaged 50.3 points per game.

The team lost to Opelika in the semifinals with 41-23. Cunningham finished the game with 14-for-30 for 285 yards with a total of three touchdowns while dealing with shoulder issues in the game.

After redshirting his first year at Louisville in 2017, Cunningham made his appearance in consecutive 10 games and made almost three starts in 2018. He completed 40 out of 67 passes with one touchdown over the field of 473 yards.

In his 2019 career, he completed an overall 111 out of 178 passes for 2,065 yards, 22 touchdowns, and 5 interceptions. He was named MVP because of his performance in the year 2019 in Music City Bowl after he passed for 279 yards with two touchdowns and rushing for 81 yards.

ESPN listed Cunningham in its Top 100 players for the 2021 season, placing him at No. 65. The publication’s comments on Cunningham echo what 71 percent of respondents to a recent Cardinal Authority preseason poll also hope – that Cunningham will be more like his 2019 performance, when he finished as one of the nation’s more efficient quarterbacks.

Cunningham’s increased patience in the pocket won’t keep him from impacting the ground game. In 32 career games he has rushed for 1,588 yards, the second most by a quarterback in program history.