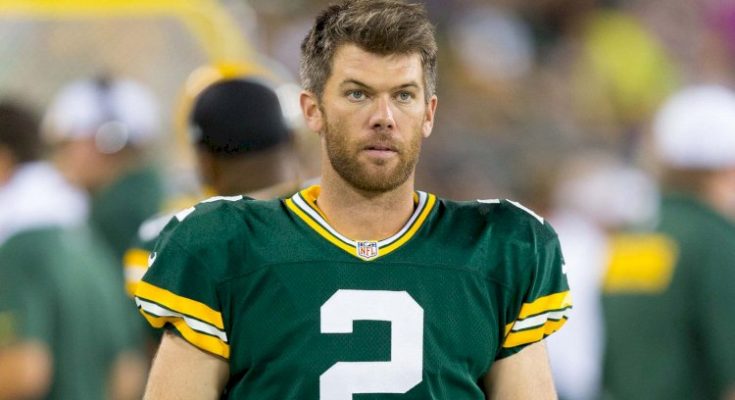 Mason Crosby is an American football placekicker for the Green Bay Packers know all about Mason Crosby Family, Net Worth, Parents, Wife and More in this article.

Mason Walker Crosby is an American football placekicker for the Green Bay Packers of the National Football League (NFL). He played college football for the University of Colorado, and earned unanimous All-American honors. The Packers chose him in the sixth round of the 2007 NFL Draft, and he was a member of the Packers’ Super Bowl XLV championship team against the Pittsburgh Steelers.

Mason Crosby was born on 3rd September 1984 in Lubbock, Texas.His Parents name is Jim Crosby and Karen Crosby.Crosby attended and played high school football at Georgetown High School. Crosby also attended Werner, Elementary in Fort Collins, Colorado. For his higher and further studies, he went to the University of Colorado Boulder. He graduated with a major in Communication.

Mason Crosby is married with wife Molly Ackerman. They studed in the same college and met where he was a football player and Molly was a cheerleader. On 28th June 2008, they tied a knot in a private wedding ceremony. They have three children whose names are Nolan James, Charlotte, and Elizabeth.

Mason Walker Crosby is an American football placekicker for the Green Bay Packers has an estimated Net Worth around $4 Million in 2022.

Crosby was chosen by the Green Bay Packers in the sixth round of the 2007 NFL Draft, the last of three consecutive picks for the Packers, and the third kicker overall.Crosby entered training camp in a battle with incumbent placekicker Dave Rayner. During Green Bay’s first pre-season game against the Pittsburgh Steelers, Crosby kicked a 52-yard field goal, the longest field goal in the history of Heinz Field. Crosby won the starting job during the final roster cut.

Crosby was awarded the NFC Special Teams Player of the Month for November 2007.He led all NFL kickers with 54 points and tied for the lead with 12 field goals as the Packers posted a 4-1 mark. Crosby converted 12 of 15 field goals during November and was a perfect 18-for-18 on PATs. He had at least one field goal in every game, including four in the Week 9 win at Kansas City.

His longest field goal of the month was a 52-yarder in the Week 13 contest at Dallas. For the 2007 season, Crosby led the NFL with 130 points scored and his 24 field goals ranked first in the NFC. Crosby finished second for most points scored in a season by a rookie (Kevin Butler had 144 points for Chicago in 1985). Crosby finished 2007 with the highest-scoring season by a kicker in franchise history and third-highest season point total by any Packers player.

On October 14, 2019, Crosby kicked 3 field goals, including the game-winner, in a Week 6 victory over the Detroit Lions; he performed a Lambeau Leap to celebrate the victory. He kicked another game-winning field goal during a Week 17 rematch against the Lions on December 29.

On March 23, 2021 the Green Bay Packers restructured Crosby’s contract by converting part of his base salary into a salary bonus, as well as his $1.25M roster bonus to a signing bonus. Part of this restructure was also included extending his contract with 3 void years

.In a Week 3 win against the San Francisco 49ers, Crosby made all 3 of his field goal attempts, including the 51–yard game-winner as time expired.