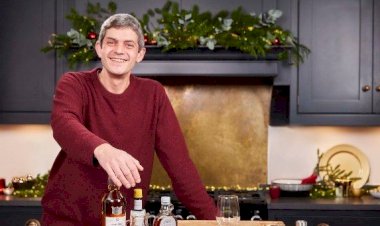 Merlin Griffiths is the instantly recognisable barman from C4’s First Dates. He is usually the man tasked with warming the First Daters up and breaking the ice. After maitre d’ Fred Sirieix offers the daters a seat at the bar, Merlin makes them their perfect drink – while quizzing them about their choice of date.

Merlin is 46 year now, he grew up in Cheltenham, Gloucestershire, and was educated at Pate’s Grammar School. Merlin, who previously worked in India, owns his own bar and restaurant, The Priory Tavern, in Kilburn, north-west London. The King of Cocktails, Merlin has been a Bartender and Mixologist for more than 20 years and has worked all over the world.

Merlin is married with partner Lucile, who he fittingly met at a cocktail competition in Canada more than a decade ago! .Initially Lucile and Merlin took over The Priory Tavern in 2010. They have one child together.

Merlin is the barman at the First Dates restaurant has an estimated Net Worth arround $1 Million – $2 Million in 2021.

Merlin Griffiths has worked around the world. And his somewhat eclectic list of jobs includes working in Soho cocktail bars to high volume restaurants, members clubs, nightclubs and corporate events. He spent three and a half year working in global marketing for Bacardi as Global Ambassador for Bombay Sapphire Gin. The role subsequently saw Merlin travel extensively across the world.

A walking encyclopaedia of anything to do with spirits and cocktails, Merlin has appeared in First Dates since series one in June 2013. It is a hugely popular TV show which continues to attracts millions of fans of all ages. Merlin also appears on ‘Saturday with James Martin’ creating cocktails for viewers to make at home.. Their current business is called The Malsters and sits on Badby Villlage Green. Merlin and Lucile have just spent the last six months renovating it into a really super and charming pub and restaurant. They have one daughter.

Doctors have told Merlin he has a 75 per cent chance of living beyond five years, as he faces a year of treatment.However he has bravely declared: “I won’t let it get the better of me.”Speaking to the Sunday Mirror, Merlin said: “The tumour has breached the colon.“It’s wanting to move into the tissues surrounding it.

But importantly, it hasn’t got into the lymph yet, meaning it’s not spread.” In June, Merlin started getting pain in his stomach, which he initially put down to scar tissue caused by a car accident when he was 20.But doctors discovered a 4.5cm Stage 3 tumour, and while he admits he “shed a tear in private”, he is determined to beat the disease.