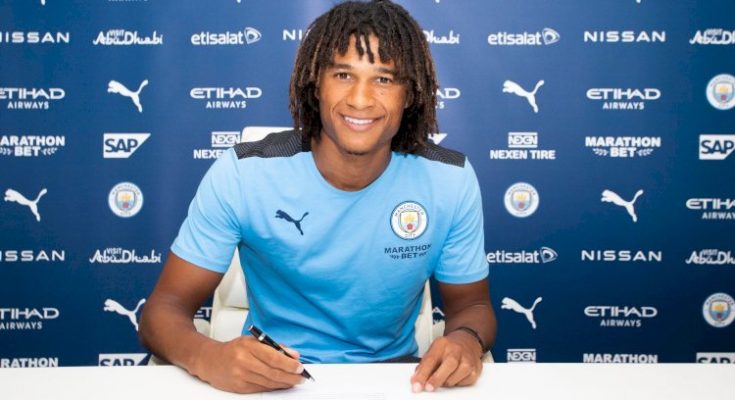 Nathan Benjamin Ake is a Dutch professional footballer who plays for Premier League club Manchester City and the Netherlands national team. Although he predominantly plays as a centre-back, he has also been deployed as a left-back.Aké made his Premier League debut on 26 December 2012 against Norwich City as a 17-year-old, replacing Juan Mata

Ake was born in The Hague, South Holland. His father is from the Ivory Coast. Ake is a teetotaller. Aké agreed to join the Chelsea youth system from Feyenoord in 2010 at age 15. He had played at Feyenoord since age 12 after joining the club from ADO Den Haag.

Nathan Ake is in relationship with Kaylee Ramman. Kaylee and Nathan started dating back in 2011 and put in all the required efforts to keep the teenage relationship alive. These two literally saw each other go through difficult situations and grow through the same. Moving past all hurdles, Nathan beautifully proposed to his teenage sweetheart after 9 years of dating.

Nathan Benjamin Ake is a Dutch professional footballer who plays for Premier League club Manchester City has an estimated Net Worth arround $9 Million in 2022.

Aké made his Premier League debut on 26 December 2012 against Norwich City as a 17-year-old, replacing Juan Mata in added time at the end of a 1–0 win at Carrow Road. He made his first start for the club in the FA Cup on 27 February 2013 in a 2–0 win against Championship team Middlesbrough. He was chosen to start in a defensive midfield position for Chelsea in the second leg of their UEFA Europa League quarter-final clash with Rubin Kazan in Russia on 11 April, a match that finished in a 3–2 loss but resulted in a 5–4 aggregate victory.

Aké was an unused substitute for Chelsea in the Europa League final against Benfica at the Amsterdam Arena on 16 May, which Chelsea won 2–1. He was voted Chelsea’s Young Player of the Year on 16 May, and made his first Premier League start three days later in the 2–1 win against Everton at Stamford Bridge on the last matchday of the season.

On 8 August 2013, Aké signed a new five-year contract with Chelsea, lasting until 2018. Following his permanent promotion to the first team, on 21 October 2014, Aké made his UEFA Champions League debut from the substitutes’ bench, coming into the match for Cesc Fàbregas in the 60th minute during a 6–0 home win over Maribor, and provided an assist for Eden Hazard’s second goal.

On 29 June 2016, Aké joined AFC Bournemouth on loan for the 2016–17 season.On 21 August, he made his Bournemouth debut in a 1–0 away defeat against West Ham United, replacing Jordon Ibe following teammate Harry Arter’s dismissal after a challenge on Cheikhou Kouyaté. Following the defeat to West Ham, Aké made his full debut against Morecambe in the second round of the EFL Cup on 24 August. On 19 November, in his first Premier League start, Aké scored his first goal for Bournemouth in a 1–0 away victory over Stoke City.

On 30 June 2017, Aké signed a contract with Premier League club Bournemouth on a permanent basis for a club record of £20 million transfer fee, with the player officially re-joining the club the following day, when the 2017 transfer window opened.On 21 July, it was reported his former club Chelsea had inserted a buy-back clause for Aké in his transfer contract.

On 5 August 2020, Aké signed for Manchester City, on a five-year deal, for a reported fee of £41 million.Aké started and debuted in City’s first game of the season in September, winning 3–1 against Wolverhampton Wanderers away from home in the Premier League.