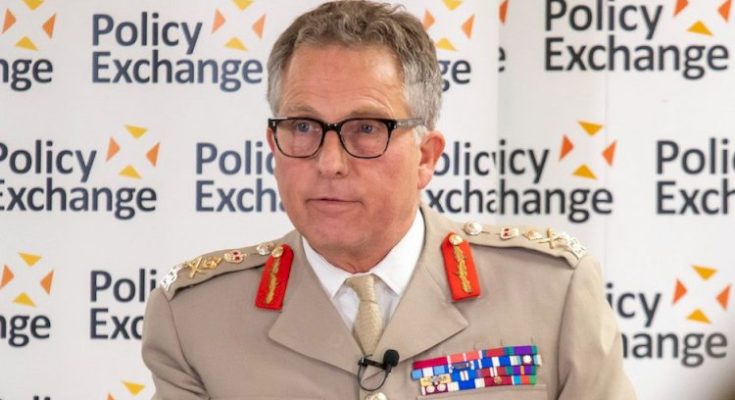 Nick Carter ( General )  GCB, CBE, DSO, ADC Gen is a Kenyan-born senior British Army officer know all about him in this article as like his Family, Net Worth, Parents, Wife, Children and Career.

General Sir Nicholas Patrick Carter, GCB, CBE, DSO, ADC Gen  is a Kenyan-born senior British Army officer. He served as commanding officer of 2nd Battalion, Royal Green Jackets in which role he was deployed to Bosnia in 1998 and Kosovo in 1999.In September 2014, he became head of the British Army as Chief of the General Staff succeeding General Sir Peter Wall. In June 2018 he succeeded Air Chief Marshal Sir Stuart Peach as Chief of the Defence Staff.

Carter was Born in Nairobi, Colony of Kenya the son of Gerald and Elspeth Carter, Carter was educated at Winchester College and the Royal Military Academy Sandhurst.He was commissioned into the Royal Green Jackets as second lieutenant on 8 April 1978, initially holding a short service commission.Promoted to lieutenant on 8 April 1980,he switched to a full career commission in 1982,and was promoted to captain on 8 October 1984.As a junior officer he served in Northern Ireland, Cyprus, Germany and Great Britain.

Carter married Louise Anne Ewart; they have three sons and one daughter.

In 1998 he was appointed Commanding Officer of 2nd Battalion, Royal Green Jackets in which role he was deployed to Bosnia in 1998 and Kosovo in 1999.For his service in Bosnia, he was awarded the Queen’s Commendation for Valuable Service on 7 May 1999.

In Kosovo, Carter commanded a group of peacekeepers on a bridge over the River Ibar at Kosovska Mitrovica where he was tasked with keeping apart thousands of Serbs and Albanians gathered on either side of the bridge. Carter later described the role as being the “meat in the sandwich”.He was advanced to Officer of the Order of the British Empire on 3 November 2000.

Carter was promoted to colonel on 31 December 2000 and advanced to Commander of the Order of the British Empire on 29 April 2003, following service in the War in Afghanistan.He was promoted brigadier on 31 December 2003 (with seniority from 30 June), and in 2004 he was given command of 20th Armoured Brigade, commanding British forces in Basra,at one point stating that British forces could be in Iraq for “as long as a decade”. On 7 September 2004 he was awarded a further Queen’s Commendation for Valuable Service for his service in Iraq.

Carter became Director-General Land Warfare early in 2011and, having been awarded the Distinguished Service Order in March 2011, he was promoted to lieutenant general and appointed Commander Field Army in November 2011(the role redesignated Deputy Commander Land Forces in January 2012).He was the main architect of the Army 2020 concept and reported on his recommendations in April 2012.

Carter was appointed Knight Commander of the Order of the Bath (KCB) in the 2014 New Year Honours.On 21 February 2014 it was announced that Carter would assume the post of Chief of the General Staff.He took up his post and was promoted to full general on 5 September 2014.As of 2015, Carter was paid a salary of between £170,000 and £174,999 by the department, making him one of the 328 most highly paid people in the British public sector at that time.Carter was awarded the US Legion of Merit on 18 March 2016 for services in Afghanistan.

In June 2018 Carter succeeded Air Chief Marshal Sir Stuart Peach as Chief of the Defence Staff.In August 2018 Carter said he would not allow British soldiers to be “chased” by people making “vexatious claims” about their conduct during the Troubles in Northern Ireland.

Carter said serving and former service personnel should face action for “genuine” wrongdoing. But he vowed groundless cases “will not happen on my watch”.In 2018 Carter also became the patron for the UK charity Supporting Wounded Veterans.Carter was appointed Knight Grand Cross of the Order of the Bath (GCB) in the 2019 Birthday Honours.In 2020, Carter was one of the senior public servants who took part in the Government’s daily coronavirus briefings.