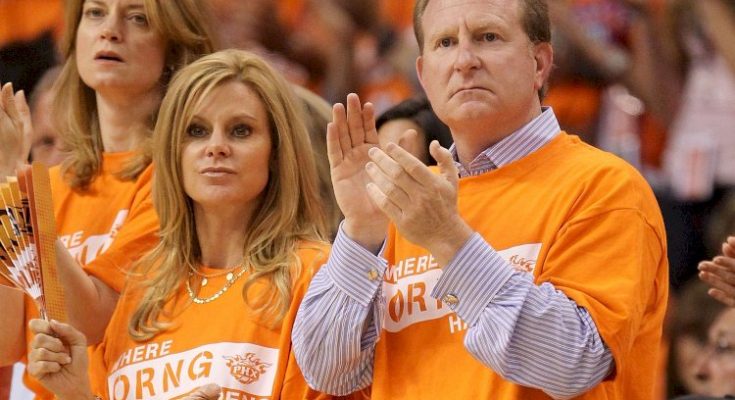 Penny Sanders is married with famous American Business man Robert Sarver . The couple met in 1991 and tied the knot on November 2, 1996. Sanders is also a businessman and after graduating from college in 1990 moved to Phoenix to work with Prentice-Hall marketing textbooks. University. He reportedly has a bachelor’s degree in business from the University of Oklahoma. Sarver and Sanders have three children, Max, Jake, and Zach Sarver, and reside in Paradise Valley, Arizona.

Robert and his family live in a new $14 million property in the Phoenix area. The property has almost everything you would want in a home which includes 12 courtyards and a 12-car garage. The best thing about the house is its backyard basketball playground which has a giant phoenix sun blue, gold and orange logo painted on the court.

Penny and her husband Robert Sarver both are active in business currently Penny Sanders exect net worth is not known but as per Robert Sarver the has an estimated Net Worth around $800 Million in 2021.

Sarver Heart Center’s description of the couple states that both Robert and Penny come from a “generous family rooted in the most active and respected charities in the state.” They have been helping the Heart Center with donations since 1998.

Taking about his and wife’s involvement in the charitable work, Robert noted, “Penny and I are fortunate that our parents taught us to give a little back when we have been successful. We are fortunate to be able to do that.”“Our sons may not understand that now, but they will one day and this will be something that they can be very proud of too,” he added further.

What has Robert Sarver been accused of?

According to an expose published by ESPN on November 4, Sarver allegedly made several uncouth misogynistic and racist comments during his 17-year tenure as a Suns owner .Earl Watson, Suns head coach, told ESPN that after a game against the Golden State Warriors, Sarver allegedly said:

“You know, why does Draymond Green get to run up the court and say [N-word],” repeating the n-word several times in a row.In interviews with more than 70 former and current Suns employees, many of them claimed they felt uncomfortable around Sarver.

In another alleged incident, “Sarver once passed around a picture of his wife in a bikini to employees and spoke about times his wife performed oral sex on him,” reported ESPN.” The level of misogyny and racism is beyond the pale,” one Suns co-owner told the outlet about Sarver. “It’s embarrassing as an owner.”

Sarver and his legal team have categorically denied all accusations against him. Sarver issued a statement about the alleged accusations, saying: “I am wholly shocked by some of the allegations purported by ESPN about me, personally, or about the Phoenix Suns and Mercury organizations.

“While I can’t begin to know how to respond to some of the vague suggestions made by mostly anonymous voices, I can certainly tell you that some of the claims I find completely repugnant to my nature and to the character of the Suns/Mercury workplace and I can tell you they never, ever happened.“ First and foremost, I reject any insinuation of personal or organizational racism or gender discrimination.

“I despise language that disrespects any individuals, regardless of race, gender, preference, or choice.” Such language has no place in business or at home in what I consider Suns and Mercury families.”