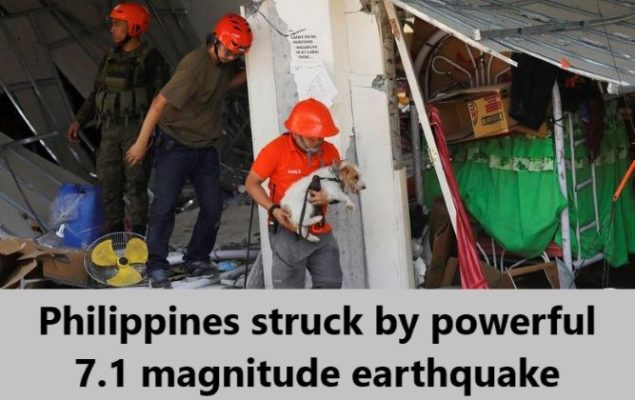 A powerful earthquake killed at least two people and injured dozens more in the northern Philippines, where the tremor triggered small landslides, damaged buildings and churches, and prompted terrified crowds and hospital patients in the capital to rush outside.

According to Renato Solidum, the head of the Philippine Institute of Volcanology and Seismology, the 7-magnitude quake was centered in the mountainous province of Abra.”The ground shook like I was on a swing, and then the lights went out.” We rushed out of the office, and I heard screams and saw some of my colleagues in tears,” said Michael Brillantes, a safety officer in the Abra town of Lagangilang, which is close to the epicenter.

“It was the most powerful quake I’d felt, and I thought the ground would open up,” Brillantes said over the phone to the Associated Press. A villager died after being hit by falling cement slabs in his home in Abra, where at least 25 others were injured and were mostly hospitalized, according to officials.

A construction worker was killed after being struck by debris in the strawberry-growing mountain town of La Trinidad, Benguet province, where some roads were closed due to landslides and boulders. According to officials, five people were injured when rocks and debris smashed their SUV and truck on a hillside road in Mountain province near Benguet.

Many houses and buildings had cracked walls, including some in Abra, where new President Ferdinand Marcos Jr., who took office less than a month ago, planned to visit victims and local officials. The Red Cross released a photo of a small three-story building in Abra that was precariously leaning toward a debris-covered road. A terrified witness captured video of parts of an old stone church tower being peeled off and falling in a cloud of dust on a hilltop. Philippines struck by powerful 7magnitude earthquake