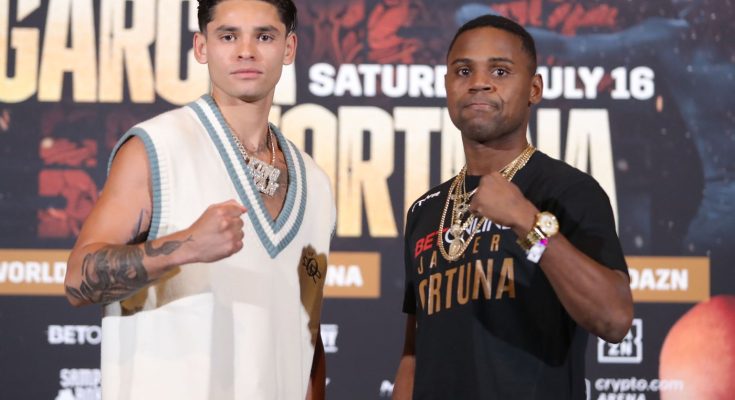 In his second fight of the year, Ryan Garcia faced former WBA Super Featherweight World Champion Javier Fortuna. The fight took place at the Cyrpto.com Arena in Los Angeles, California, home of the Los Angeles Lakers. For Garcia, the outcome of this fight could pave the way for a title shot in the future. Fortuna, on the other hand, was aiming to reach the top of the division.

GARCIA vs FORTUNA Round 1

In the first round, Garcia takes the lead with a jab that misses while Fortuna maintains a tight guard. Garcia attempts a left hook this time before scoring with a straight right. Garcia lands and jabs. Garcia takes a right hand lead, and Fortuna responds with a hook. Garcia tries three lead rights, none of which find the range. Fortuna tries but fails to land a left loop.

GARCIA vs. FORTUNA Round 2

In the second round, Garcia flicks a jab to establish range. Garcia’s right hand misses Fortuna’s body. Upstairs, Fortuna lands a counter-punch. Garcia’s right hand makes a partial contact. Gortuna fires a shot to the body but is met with a right hand from Garcia. Garcia attempts to whip a hook through the rop. Garcia lands three clean punches in the centre of the ring. Garcia’s jab lands upstairs.

GARCIA vs. FORTUNA Round 3

GARCIA vs. FORTUNA Round 4

Garcia’s right hand lead falls short. More lead rights come from Garcia, but he doesn’t land them here, but he does keep Fortuna on the defensive. The right hand lands on Fortuna’s head. Garcia now throws a couple more quick punches upstairs. Garcia is following Fortuna here and letting his hands go. Fortuna is defeated by a hard left to the body! Garcia wants to finish Fortuna off, but Fortuna is bobbing his head and moving around, trying to fool Garcia. Garcia gets a clean jab. Garcia’s left hook strikes the body once more. Garcia lands a left hook upstairs, and Fortuna mounts his bike.

GARCIA vs FORTUNA Round 5

Garcia’s right hand misses, but he scores a check hook as Fortuna steps forward. Fortuna now lands his own hook. Garcia lands a left hook upstairs before turning to face the body with another. Garcia scores with his right hand. GARCIA DROPS FORTUNA LEFT HOOK! Fortuna stands up and wings a hook in an attempt to get Garcia off of him. Fortuna retreats, then comes to a halt and lands an overhand right. Garcia lands a jab, then another.

GARCIA vs. FORTUNA Round 5

Fortuna’s right hook misses the mark as he tries to get aggressive, but he WALKS INTO A COUNTER LEFT AND GETS FLOORED! Fortuna has finished!

Throughout the fight, Ryan Garcia appeared to be sharper than his Dominican opponent. The fight began fairly evenly, with both fighters sizing each other up and throwing punches to see how the other would react. After the third round, ‘KingRy’ began to dominate the ring, connecting with punches at will and disrupting his opponent’s rhythm.