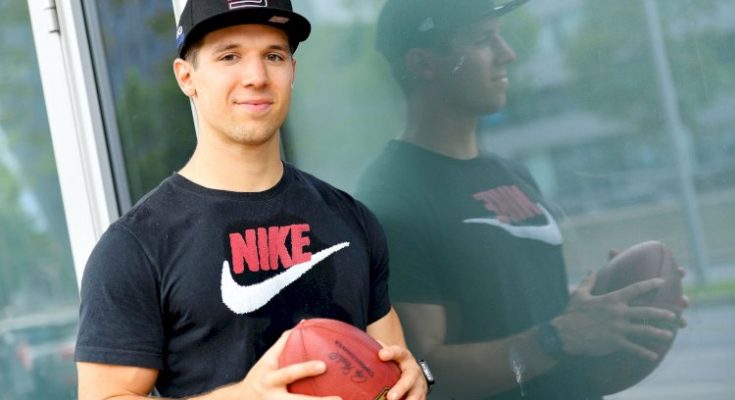 Sandro Platzgummer is an American footballer for New York Giants officially announced running back Sandro Platzgummer. He has spent the 2020 season on Big Blue’s practice squad as part of the NFL’s International Player Pathway program, has been re-signed.

He came to the Giants by way of Austria, where he totaled just under 1,000 yards in 2019.Sandro has represented Austria on their U19 team and competed on the senior team in the 2018 European Championships.

Sandro belongs to the Austrian nationality. Regarding Sandro’s early life, he was born and raised in Innsbruck, Austria. Sandro’s current age is 24.Sandro has a younger sister. Sandro’s sister’s name is Tizzi Platzgummer.

Sandro Platzgummer is currently dating his girlfriend, Julia Triendl. Julia is a Volleyball player who is now 20 years old. Sandro is public regarding his relationship status and has posted a lot about his girlfriend on his Instagram.

Sandro Platzgummer is an American footballer who has an estimated Net Worth of has $ 1 to 5 million in 2022.

Platzgummer started playing football and gymnastics at a young age. He became acquainted with football at the age of 6. But Sandro preferred American football eventually.  He started participating in the Swarco Raiders Tirol Football youth program. He played football well and won all the titles. And he also played with the Austrian national team both for the junior and the men in Austria.

The New York Giants in April 2021 that Sandro would be signed as a regular player. And Sandro is presently signed with the New York Giants of the National Football League. He plays the position of running back.