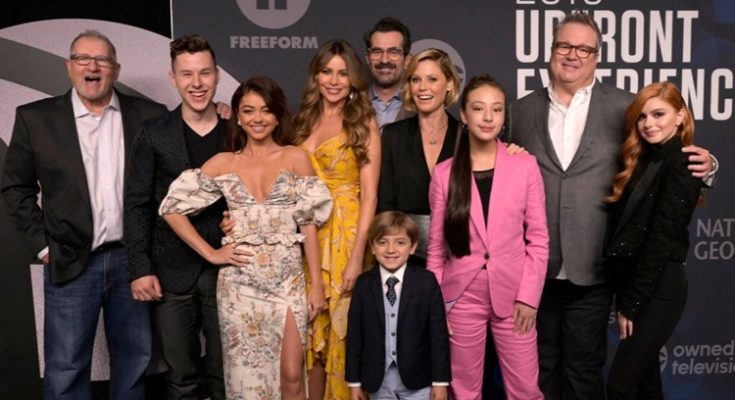 Sarah Jane Hyland is an American actress and singer. Sarah Hyland Family Tree, Parents, Husband, Children, Biography checkout here . She is best known for playing Haley Dunphy in the ABC sitcom Modern Family (2009–2020), for which she received much acclaim, including four Screen Actors Guild Awards for Outstanding Performance by an Ensemble in a Comedy Series and a nomination for the Critics’ Choice Television Award for Best Supporting Actress in a Comedy Series.

Hyland was born in Manhattan, New York on November 24, 1990. Hyland attended the Professional Performing Arts School in Manhattan.Hyland was diagnosed with kidney dysplasia as a young child and received a kidney transplant from her father in April 2012. That kidney failed after a few years, leading to a second kidney transplant in September 2017, donated by her younger brother, Ian.

After meeting in 2010, Hyland dated her Geek Charming co-star Matt Prokop for four years. Hyland obtained a domestic violence temporary restraining order against Prokop in August 2014 for physically and verbally abusing her over the course of their four-year relationship. The restraining order was made permanent in October of that year.

From 2015 to 2017, Hyland dated her Vampire Academy co-star Dominic Sherwood.Hyland began dating Wells Adams, a radio personality and former Bachelorette and Bachelor in Paradise contestant, in 2017.The couple got engaged in July 2019.

They postponed their wedding several times, originally scheduled for August 2020 but pushed back due to the COVID-19 pandemic.After an outdoor bridal shower in early June, the couple married in August 2022 at a California vineyard with Modern Family co-stars in attendance. They are currently living in Los Angeles.

Hyland has been acting since 1997, when she played Howard Stern’s daughter in the film Private Parts. She went on to play Molly in Annie’s 1999 television film and Maddie Healy in Lipstick Jungle on NBC. Hyland and actress Molly Culver appeared in an Olive Garden commercial. She also played a young Jacqueline Bouvier in Grey Gardens on Broadway (2006).

Hyland starred as Haley Dunphy on the ABC sitcom Modern Family from 2009 to 2020, for which she and the rest of the cast won the Screen Actors Guild Award for Outstanding Performance by an Ensemble in a Comedy Series each year from 2011 to 2014.

Hyland co-starred in the Disney Channel Original Movie Geek Charming in 2011.Hyland starred in the 2012 film Struck by Lightning.She appeared in a Nintendo 3DS ad campaign with Dianna Agron and Gabby Douglas in September 2012.

Hyland has also appeared in Kerrigan-Lowdermilk Live (2013 concert), Hair (2014 adaptation at the Hollywood Bowl), The Unauthorized Musical Parody of Scream (2014 play at Rockwell Table & Stage), and The Kindred Foundation for Adoption, founded by Jenna Ushkowitz and Samantha Futerman (2015 fundraiser).

At the 2019 Teen Choice Awards, Hyland made her debut performance of “Met At a Party” with Jordan McGraw (son of Dr. Phil). Republic Records released the single on August 9, 2019. Hyland and Joe Keery appeared in a Taco Bell commercial called “The Craving” in December 2020.Hyland began hosting Love Island USA on Peacock in the summer of 2022.

She appeared on America’s Got Talent (along with Sofia Vergara) during the first live Qualifier Results Show of season seventeen in August 2022, to assist season sixteen winner Dustin Tavella with his magic act.Hyland will star in Pitch Perfect: Bumper in Berlin, which will air on Peacock in November 2022.