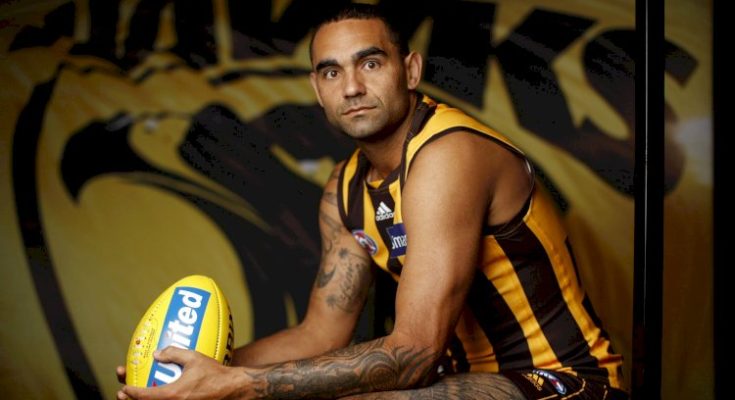 Burgoyne was the first Indigenous Australian VFL/AFL footballer to reach the 400-game milestone, and the fifth overall. He was also the first to have reached the milestone playing for two different clubs.

Burgoyne is married to Amy née Phillips, who is the daughter of Port Adelaide legend Greg Phillips and sister of WNBA and AFLW superstar Erin Phillips. Together they have four children – Nixie, Leni, Ky and Percy.

Shaun Playford Burgoyne is a retired Australian rules footballer who played for the Hawthorn and Port Adelaide Football Clubs in the Australian Football League who has an estimated Net Worth of between $4 million in 2022.

Drafted with pick 12 in the 2000 national draft, Burgoyne would have to wait a year to make his AFL debut in round 3, 2002 against St Kilda. He had been a steady contributor across the forward line for Port Adelaide, before becoming a rebounding defender to great effect.

In 2004 Burgoyne played every game for the season and was part of Port Adelaide’s inaugural AFL premiership.After a series of midfield performances that culminated with selection to the All Australian Team in 2006, he was described by retiring Port player Josh Francou as being “as good as Judd”.

Burgoyne was important in Port Adelaide’s midfield in 2008, despite attracting the opposition’s best tagger most weeks. While not reaching the heights of past seasons, he finished fourth in the best and fairest and was second at the club in centre clearances, tackles and inside 50s, and fourth in goals (23), contested possessions and bounces. 2009 was a disappointing year after injuring his knee in round three and missing three months of footy. He was able to come back and play a few good games late in the year.

As vice-captain, he shocked the football club by requesting a trade to play for a Victorian team in 2010 after his brother had retired. Port traded him to Hawthorn in a complicated deal involving four clubs, with Essendon and Geelong also involved. He was allocated former club champion Shane Crawford’s No. 9 jumper.

After having surgery on his knee during the offseason that delayed his preparation for the 2010 season, Burgoyne suffered a broken jaw while playing for Box Hill, and later suffered a hamstring injury.He made his debut against Richmond in Round 8, 2010. Burgoyne played the last sixteen games of the season.

During 2011 Shaun Burgoyne played excellent football for Hawthorn, showcasing his disposal and running skills. He was part of a side that lost the preliminary final to eventual runners-up Collingwood by 3 points.Burgoyne was part of Hawthorn’s losing side in the 2012 AFL Grand Final.

In 2013, Burgoyne’s performance in the Preliminary Final against Geelong saw him kick 3 goals and also provide goals assists, with his final goal putting Hawthorn back in front late in the fourth quarter. The match ended the 11-game losing streak against Geelong, in effect since the 2008 Grand Final win.

On 28 September 2013 Burgoyne became a dual Premiership player after Hawthorn defeated Fremantle Football Club in the Grand Final in front of 100,007 fans at the MCG. Burgoyne was the only player to remain completely in his game outfit when the players were presented on stage following the conclusion of the post-match concert.With Hawthorn’s win in the 2015 Grand Final, Burgoyne became a quadruple Premiership player.

On 24 May 2017 it was announced that he would wear number 67 on his guernsey, rather than his usual 9, for the round 10 Sir Doug Nicholls Round (the “Indigenous Round”) game against Sydney. This was to commemorate the 1967 referendum which allowed Indigenous Australians to be counted with the general population in the census.

In 2019, Burgoyne was heavily linked to a move to the Gold Coast. Burgoyne himself addressed the speculation, admitting it had been stressful and that he had a big decision to make.On 12 September, it was announced he would remain a Hawk for 2020.At the end of the 2020 season, Burgoyne signed a one-year deal extending his career into a twentieth season, and announced that it would be his last season.