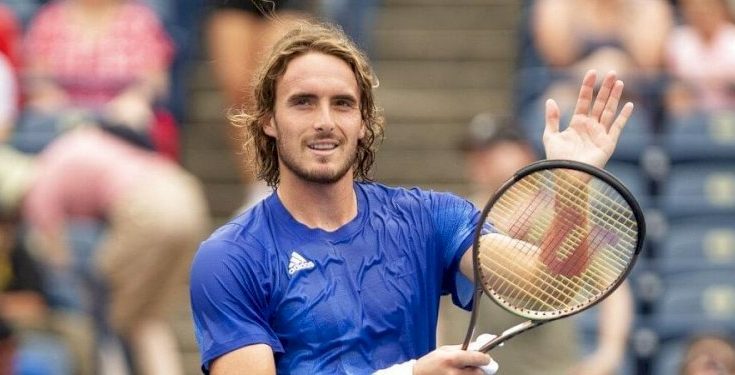 Stefanos Tsitsipas is a Greek professional tennis player know all about Stefanos Tsitsipas Family, , Parents, Wife, Professional Career, Children.Tsitsipas was the champion at the 2019 ATP Finals, becoming the youngest winner of the year-end championships in eighteen years. He has won seven ATP singles titles.

Stefanos Tsitsipas is a Greek professional tennis player. He is the second youngest player ranked in the top 10 by the Association of Tennis Professionals and currently has a career-high ranking of No. 3 in the world, making him the highest-ranked Greek player in history.

Tsitsipas was born to his Parents Apostolos Tsitsipas (Father) and Julia Apostoli (Mother) in Athens. His father is Greek and he was born in Proastio, Karditsa and his mother is Russian of partial Greek descent. Both of his parents are experienced tennis players.Tsitsipas studied at an English-language school in his youth. He can speak English, Greek, and Russian. He is a supporter of Greek football club AEK Athens. Tsitsipas’s hobbies include vlogging. He hosts his own YouTube channel where he posts videos of his travels.

Tsitsipas credits his mother’s twin sister, who was also a professional tennis player in the Soviet Union, for helping with the family’s finances so that he could afford to travel with his father to train and compete during his junior career.His maternal grandfather Sergei Salnikov was an Olympic gold medal-winning member of the Soviet national football team and a former manager of FC Spartak Moscow.

The tennis star Stefanos Tsitspas is currently dating Theodora Petalas. The couple was first seen together on holiday in 2020 and on nights out with friends. Stefanos knows her girlfriend Theodora Petalas for 3 years through some mutual friends. In an interview, Stefanos shared that they started dating about 2 years ago when he was in New York.

Tsitsipas is a former world No. 1 junior.He began playing on the ITF junior circuit in 2013 at the age of 14. He did not play in any high-level Grade A tournaments until the Abierto Juvenil Mexicano in November 2014, but was able to make it all the way to the final of his second career Grade A event at the Orange Bowl a month later.

Tsitsipas had entered the tournament ranked outside of the top 100 in the junior rankings.In 2015, Tsitsipas got his first opportunity to play in the junior Grand Slam tournaments. In these four events, a quarterfinal at the Australian Open was his best result.

He did not win any singles finals that year, but he did have another runner-up finish at the Orange Bowl, this time losing to Miomir Kecmanović in a third set tiebreak.He finished the season as the No. 14 ranked junior in the world.

Tsitsipas began playing low-level ITF Futures events in Greece in 2013 shortly after turning 15, not long after he started competing on the junior tour.He qualified for his first event on the ATP Challenger Tour at the Burnie International in early 2015 while still 16 years old, but lost his only main draw match to Benjamin Mitchell.Tsitsipas won his first Futures title later that year and would go on to win a total of eleven such titles, five in singles and six in doubles, through the end of 2016.

At the US Open, Tsitsipas made his main draw debut, but was upset in the second round by fellow Next Gen player Daniil Medvedev.He cited fatigue as a factor in the loss and proceeded to exit before the quarterfinals at three of his next four tournaments as well.

He entered the 2020 Australian Open seeded 6th in the mens bracket, but failed to repeat his success of 2019, losing in the 3rd round to Milos Raonic. He then entered the ABN AMRO World Tennis Tournament seeded 2nd, but failed to live up to his seed as he lost in the round of 16 to Aljaž Bedene. He recovered quickly to defend his title at the Open 13 tournament, winning his 5th ATP title, recording in the process 4 wins in a row without dropping a set, and defeating Félix Auger-Aliassime in the final.

He became the first Greek man to win a singles match at the Olympic Games since Augustos Zerlandis in 1924 with his first round 6-3, 3-6, 6-3 win over Phillip Kohlschreiber.He lost in the third round to Ugo Humbert of France in three sets.