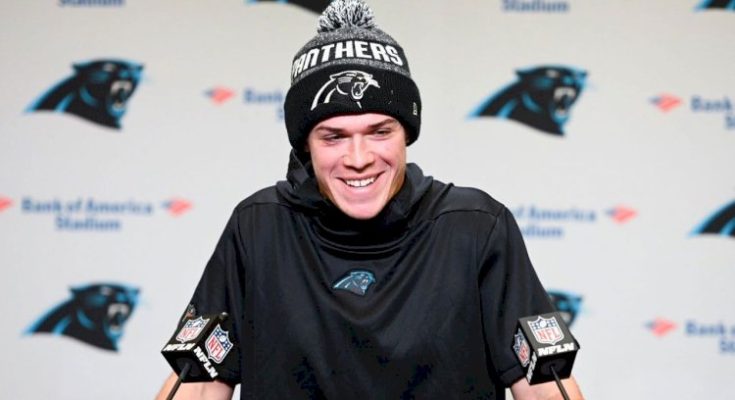 Taylor Heinicke is an American football quarterback for the Washington Football Team of the National Football League (NFL). He played college football at Old Dominion University.

He has been a member of the NFL’s Minnesota Vikings, whom he joined as an undrafted free agent in 2015, as well as the New England Patriots, Houston Texans, and Carolina Panthers. In addition, he was a reserve quarterback for the St. Louis BattleHawks of the XFL in 2020.

Taylor was born on 15th March 1993 in Lawrenceville, Georgia to Brett Heinicke and Diane Dodsworth. While playing football as a senior at the college level, Taylor Heinicke was named as the old spice national player of the year-the award which is presented to only 50 high school varsity football athletes.

Heinicke played football under head coach Kevin Reach at Collins Hill High School in Suwanee, Georgia, where he was an all-state selection as a junior after guiding Collins Hill to a 10–4 record and a trip to the Class AAAAA semi-finals.He appeared on the reality TV show The Ride, which featured high school quarterbacks competing for a spot in the U.S. Army All-American Bowl.

Taylor Heinicke is not maried yet.He is not involved in any love affair and has not released much information about his personal life including his wife, girlfriend, or any love affair. Taylor loves to spend time with his family and friends.

Taylor Heinicke is an American football quarterback for the Washington Football Team of the National Football League has an estimated Net Worth arround $2 Million in 2022.

In 2011, Heinicke accepted an athletic scholarship to attend Old Dominion University (ODU), where he played for the Old Dominion Monarchs football team from 2011 to 2014.Heinicke became the starter for the Monarchs in 2011. That year, he led the Monarchs to a 10–3 record in the Colonial Athletic Association, but lost in the second round of FCS playoffs against Georgia Southern.

Heinicke went undrafted in the 2015 NFL Draft, but signed with the Minnesota Vikings as an undrafted free agent.He competed against Mike Kafka to back up Vikings starting quarterback Teddy Bridgewater along with Shaun Hill. Kafka would get injured and was placed on injured reserve, making way for Heinicke to be the third string quarterback.

On November 29, 2017, Heinicke was signed to the Houston Texans’ practice squad.He was promoted to the active roster on December 15, 2017, to back up T. J. Yates following an injury to Tom Savage.On December 25, 2017, Heinicke made his NFL debut against the Pittsburgh Steelers after Yates suffered a possible concussion. However, after completing his only pass attempt, Heinicke suffered a concussion and was replaced by Yates, who had just passed the concussion protocol.On April 13, 2018, Heinicke was waived by the Texans.

On December 8, 2020, Heinicke signed with the practice squad of the Washington Football Team. Prior to joining them, he was in the process of finishing his engineering degree at Old Dominion. He was promoted to their active roster on December 19.

An impending restricted free agent in 2021, Heinicke signed a two-year, $4.75 million contract extension with the team in February.In the season opener against the Los Angeles Chargers, he came in relief of Ryan Fitzpatrick who left in the second quarter due to a hip injury. Heinicke was named the starter going forward after Fitzpatrick was placed on injured reserve following the game.